In Some States, Virus Deaths Could Peak Earlier Than Predicted 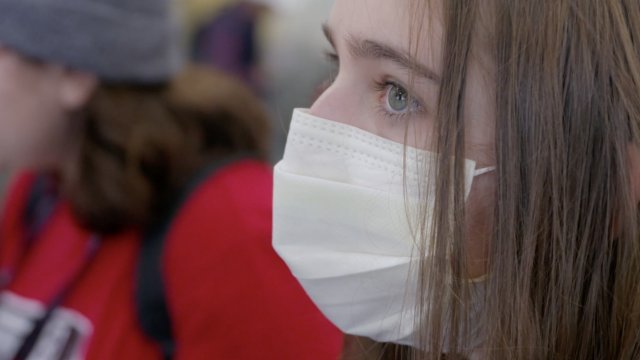 SMS
In Some States, Virus Deaths Could Peak Earlier Than Predicted
By Mark Fahey
By Mark Fahey
April 10, 2020
Coronavirus deaths may peak sooner than experts expected, according to an updated model from the University of Washington.
SHOW TRANSCRIPT

Deaths from the coronavirus may be hitting their peak sooner than expected in many states.

Last week, researchers estimated that the daily death toll would start to level out by the middle of next week. But new data has led to more optimistic predictions this week.

The model now estimates that the peak will come this weekend, and it predicts that 33,000 fewer people will die over the course of the pandemic.

What changed? The model learned from new data about the pandemic’s course in places like Italy and Spain, where deaths are already on the downswing.

And social distancing policies enacted weeks ago have made a difference in the overall curve.

Ali Mokdad is part of the team running the model at the University of Washington.

“Mortality is much lower than has been projected,” Mokdad said. “The measures are working, but Americans have been staying at home before the governors ordered them to do so. And so Americans are listening and are paying attention and they are doing their part. So good news, welcome news.”

We looked at how the model’s predictions changed for every state and we found that hospital demand will peak sooner than expected in 39 states. Almost every state will peak in the next two weeks. That’s a big change from earlier predictions.

“It means it's going to give the hospital less time to be prepared,” Mokdad said. “But the positive of that is there'll be less demand on the hospitals and for a shorter time. So in general, very good news. We hope for some places that will have more time to prepare. They don't. But at least they have less to prepare for it, which is very good.”

Earlier estimates said that 41 states would run out of ICU beds. Now, only 14 will, according to the model. And nearly every state will see fewer deaths than previously predicted.

There are a lot of models out there. Mokdad’s is probably the most prominent: The team delivers briefings to the White House daily.

“You know, again, academics will argue which model is better,” Mokdad said. “All these models are telling us exactly the same message: Staying at home is working, and then staying at home would protect life.”

Mokdad warned against taking the good news as license to ease up on social distancing. Right now, the model assumes that restrictions stay in place until the first wave of infections is over, perhaps in early June.

“We know everybody is suffering. We know everybody is going through a hardship, but they are working and they're going to help us to get out of it much faster than what we have expected before," he said. "We should stay the course and keep doing what we are doing. It's working. It's not time to relax. We will know when to relax. The data will tell us.”