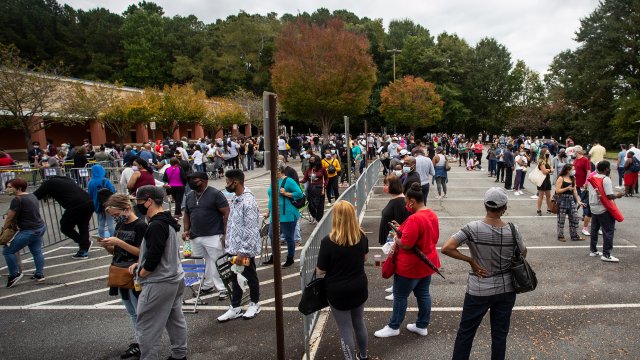 The wait for Election Day 2020 is nearly over. But the same can't be said for the wait some are facing to vote early in key states.

Across the U.S. voters are being met with long polling lines, technical problems and even registration setbacks.

Voters in Houston were lined up in their cars as early as 5 a.m. Tuesday morning. Many telling local news outlets they came out to get a jump start.

"For me I woke up it was the first thing I wanted to do, so it really kind of invigorates me to see everybody else had a similar plan," Devin Adams, a Houston voter said.

But for some in the state -- the early start was met with technical problems and delays. The Houston Chronicle reports one such problem in Fort Bend County, Texas, stemmed from computers being set for the wrong time. A mistake now being condemned by local lawmakers and the district attorney.

In Georgia on Monday, some voters found themselves facing wait times that reportedly exceeded eight hours in part due to technical problems. At the State Farm Arena in Atlanta, poll-books stopped working altogether for a period of time Monday according to the Associated Press.

Meanwhile in Virginia Tuesday, the state’s department of elections tweeted out that voters could not register online because a fiber cable had been cut. Causing the governor to extend voter registration that would have otherwise ended.

But despite the long waits and technical problems, many voters are pushing on...more than 6.6 million have voted early. Ten times the number that did so in 2016 says the United States Election Project. The 2020 general election is expected to be the first general election where more people vote before election day than on election day.

"It shows that people care and this matters, this whole election matters," Caroline Kuffner, a Houston voter said.