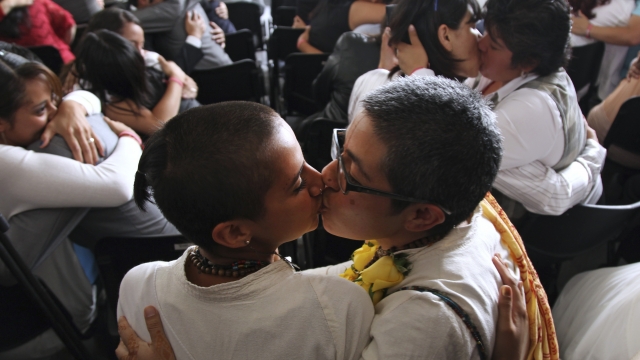 "Since becoming pope, he has never publicly come out in support of civil unions between same-sex partners. So this is a really big moment," says Candida Moss, professor of theology and religion at the University of Birmingham.

In the film "Francesco," the pope says: "Homosexual people have the right to be in a family. They are children of God."

It's a big shift in the Catholic church, which has described homosexual unions as "intrinsically disordered."

Christian historian Moss says that while the pope supports same-sex civil unions or partnerships, it's not the same as marriage.

"He's not talking about changing the teachings of the Catholic Church or allowing same sex unions to take place as Catholic marriages, as a sacrament inside of churches. But this is a really big shift," says Moss.

"It's something to be noted that he didn't exactly endorse same-sex marriages at this point ... But I hope in time that he may also support same-sex marriages as well," says LGBTQ advocate and professor Kevin Nadal. He's also gay, married and a former Catholic.

"Prior to his leadership, the Catholic Church had been really adamant about LGBTQ identities being pathological, people needing to 'pray the gay away'. And so this simple endorsement, while it doesn't necessarily change the history of homophobia in the Catholic Church, it is definitely a step in the right direction," says Nadal.

When he was an archbishop, Francis endorsed civil unions for gay couples as an alternative to same-sex marriages. Moss says this endorsement can help the church gain access to future Catholics or Catholics they've lost.

Not all Catholics are embracing the pope's endorsement. In a statement, conservative Bishop Thomas Tobin argues it contradicts the teaching of the church and says: "The church cannot support the acceptance of objectively immoral relationships."