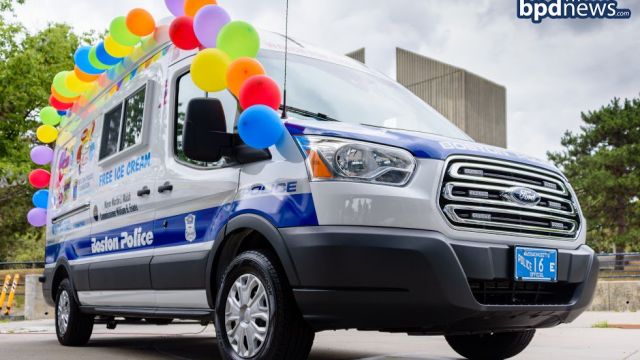 I scream, you scream, we all scream for a Boston Police Department ice cream truck.

The Boston Police Foundation presented the new ice cream truck Monday. Why does a police department need an ice cream truck? To catch ice cream bandits? To see if kids are lactose intolerant? Not quite. It's for Operation Hoodsie Cup.

Since 2010, the department has handed out 120,000 free Hoodsie Cup ice creams to kids. The $89,000 truck is a shiny new addition to the department's continued effort to help officers positively engage with their community and build relationships between kids and officers.

Police Commissioner William Evans said: "I absolutely love the new truck and everything this program represents. The goodwill it generates between my officers and our city’s young people is undeniable and nothing short of remarkable and my only regret is that I wish we had started doing this 30 years ago."

But Boston isn't the only city using ice cream for some positive press. A pair of officers in Halifax, Virginia, were spotted pranking some unsuspecting motorists.

"Are you familiar with vehicle code 1.7.3.9? Well, it's actually against the law to drive on a hot day without an ice cream cone," an officer said.

This video includes images from gordonramsaysubmissions / CC BY 2.0 and Joy / CC BY 2.0. Music provided courtesy of APM Music.