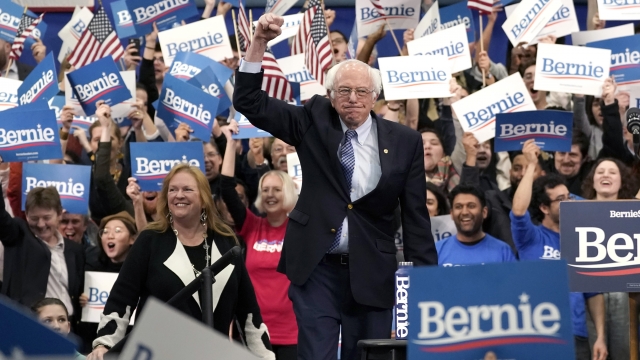 "Our campaign is not just about beating Trump, it is about transforming this country," Sanders said.

Results from the Associated Press show Sanders walked away with the win. Pete Buttigieg came in a close second, followed by Sen. Amy Klobuchar. Sen. Elizabeth Warren and former Vice President Joe Biden round out the top five.

The race between Sanders and Buttigieg in Iowa was incredibly close, so the results in New Hampshire nudge the senator to the top of the pack. But Tuesday was also a big day for Klobuchar, whose third-place finish shows her campaign is truly gaining momentum.

There was also a Republican ballot on Tuesday, and President Donald Trump easily won that contest.

Voters in New Hampshire didn't give any of the long-shot candidates a boost, though. Shortly after the polls closed, Sen. Michael Bennet and Andrew Yang announced their decisions to drop out of the race.

"You know I am the math guy, and it's clear from the numbers tonight that I'm not going to win this race," Yang said.

The next contest happens in Nevada where Democrats will caucus on Feb. 22.