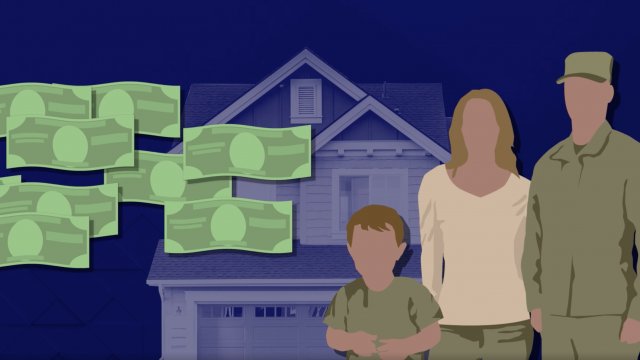 Years after joining the Navy, Lisa Javenar still worries about having enough food for her family of five every month.

We first introduced you to Lisa in May. She's the wife of Teddy Javenar, an electronics technician with the rank of petty officer third class. Some months, she doesn’t know how she’s going to feed her kids.

"We know what we signed up for," Lisa Javenar said. "It doesn't make it any easier. It's still difficult. And so to have to deal with all of that and have to worry about how we're going to feed our families. I mean, it's just — it would be awesome to not have that extra stress."

In tight months, Javenar, like thousands of other military families, helps feed her family by joining a line at the military equivalent of a food bank.

As Newsy reported, a bureaucratic oversight is costing thousands of military families critical benefits to keep them from going hungry, especially in high-rent cities like San Diego, where the value of housing can easily put them over budget.

They get what’s called a basic allowance for housing to live off-base. It covers the high rent, but also counts as income. It means they missed qualifying for SNAP benefits because on paper, they brought in too much money — by about $5 a month.

The U.S. Department of Defense issued a roadmap this summer for strengthening food security in the force.

It references a survey done in 2020 that showed 24% of active-duty service members were food insecure. That’s around 300,000 people, plus their families.

"People are shocked when they hear that military families struggle with hunger in the first place at all," said Josh Protas, policy expert at the national advocacy organization MAZON: A Jewish Response to Hunger. "And they should be shocked because there's no reason that those who serve in our armed forces should have to struggle to put food on the table."

The Department of Defense plan aims to increase access to healthy food, help military spouses with employment, look at pay, and more.

"It’s the first time that I know that a secretary of defense has spoken openly about this problem, and not tried to deflect blame onto the service members who are impacted, but to look at the systemic issues that are causing the problem," Protas said.

There are other fixes in the works. Families may soon get what is called a basic needs allowance, a sort of pay bonus for low-income military families. It was part of last year’s bill that appropriates money for the Department of Defense.

The Congressional Budget Office estimates it will mean about $400 extra each month on average.

But like SNAP eligibility, this too counts the basic allowance for housing as income, disqualifying many families.

It does give the secretary of defense power to exclude the basic allowance for housing in high-cost areas.

A few members of Congress are working hard to fix this in the next defense spending bill. One effort cleared the House of Representatives but now must make it through the Senate this fall.

The Senate’s version made it out of committee. It doesn’t tackle the housing allowance issue, but it does raise the financial limit for who qualifies for the basic needs allowance.

There are also other standalone bills to stop the housing allowance from being counted as income for SNAP eligibility, including one introduced by Sen. Tammy Duckworth, who we spoke to earlier this year.

"We have a real issue here," Duckworth said. "The same people who protect and defend us should not be worried about whether or not their children are getting food."

There’s a similar bill in the House.

Now, after Newsy’s report, some familiar faces on the veterans advocacy front are joining the fight.

John Feal fought alongside comedian and TV host Jon Stewart to get funding and benefits to 9/11 first responders, and most recently advocated for passing the PACT Act, which expanded care for veterans exposed to toxic burn pits in Iraq and Afghanistan.

The day after President Biden signed the PACT Act, Feal shifted his focus. He sent a tweet saying "24% of our military and their families are food insecure… D.C., I am coming back with a vengeance!”

It’s still unclear whether other agencies, like the USDA, the Department of Defense, or even the White House, could legally fix this quickly. But Protas says there’s one group of people in D.C. that could.

"Congress shouldn't wait for administrative action, whether or not that is forthcoming, but should do right by military families and not leave them stranded," he said.