Furloughed Workers Take On Improv To Cope During Shutdown 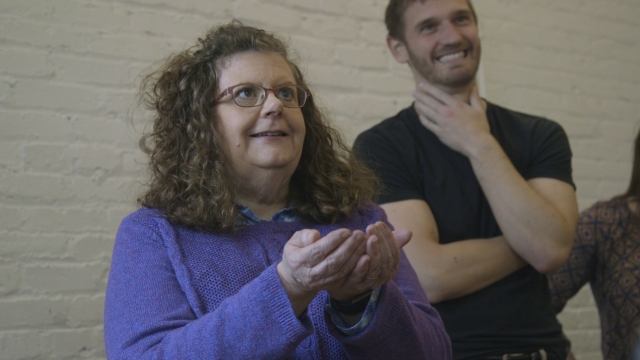 This is the Washington Improv Theater on what would turn out to be the final hours of the partial government shutdown. Furloughed Federal workers came here to cope on day 35 of the standoff between Congressional leaders and the President.

"I'm grateful for the opportunity to be able to get out to something like this that normally cost money, and I actually spent money that I don't really have to get in a cab to come to this," said Don Calvert. Calvert was one of nearly two dozen federal workers who took part in the class. "It does impact everyone of us, some more than others."

Organizers say they wanted to give back to the community.

"Yeah it's what we can do, we don't feed people, we don't have money to give people but we can give this experience," said Mark Chalfant, who is the artistic and executive director of the Washington Improv Theater. "Which I think is just, for them it's just connecting to their sort of basic humanity which frankly I think the shutdown whole shutdown is sort of overlooking."

It was a much needed distraction for these workers who are waiting to get paid. The anxiety of the shutdown had already hit many people hard before an agreement was reached.

"A lot of people look at those of us who are furloughed and think well hey you're going to get your back pay this is kind of like a little vacation, that mindset you know if you're furloughed, wears off in a week," said Portia Ross.

"It's been ok," Matthew Kelly added. "My wife and I have been saving a lot of money so finances are ok but in general just worried about the state of the government."

The classes didn't help the workers get paid any quicker. But it did bring many of them a human connection to deal with being furloughed — and it even sparked a few comedic aspirations.

"So I like to have a validation that I'm actually a funny person," Katherine Zeringue. "And I've done a little bit of sketch comedy in the past, I'm thinking about getting into stand up. And It's good to just be around laughter and people smiling and other people who just want to be goofy," she added.

President Trump says the government could shutdown again if there's no agreement on border security by February 15th. Organizers at the theater say they plan on hosting the classes again if another shutdown takes place.

"Psychologically, improv raises spirits, it gets us more in tune with each other it helps us listen harder," said improv comedy instructor Donna Steele. "And so these workshops have been so interesting to me just to see these people who don't know each other but have this shared experience come together and be like hey I got your back."