Freed Reuters Journalists Exposed A Massacre By Talking To Suspects 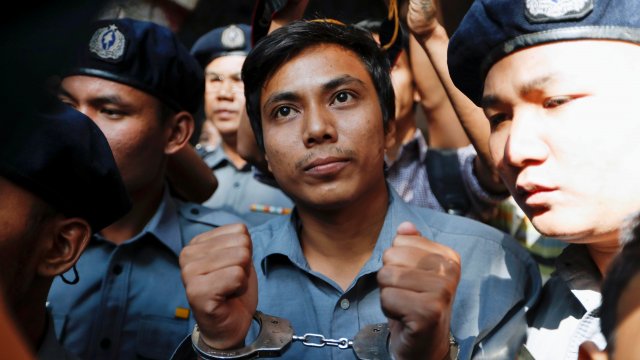 SMS
Freed Reuters Journalists Exposed A Massacre By Talking To Suspects
By Matt Picht
By Matt Picht
May 7, 2019
Recently freed Reuters reporters Wa Lone and Kyaw Soe Oo pieced together a massacre of Rohingya Muslims, in part by interviewing the suspects.
SHOW TRANSCRIPT

Reuters journalists Wa Lone and Kyaw Soe Oo spent over 500 days behind bars in Myanmar after they reported out the story of a massacre of Rohingya Muslims in the country's Inn Din village. They pieced together the events of the mass killing through dozens of interviews — some of which came from the alleged perpetrators.Wa Lone and Kyaw Soe Oo were initially sentenced to seven years in jail under Myanmar's Official Secrets Act, but have now been pardoned by the country's president as part of a custom of mass clemency during the country's traditional New Year.

Antoni Slodkowski is the Myanmar bureau chief for Reuters and shares a byline on the Inn Din story. Newsy spoke to him about the process of reporting on the massacre.