What The House Impeachment Resolution Actually Does 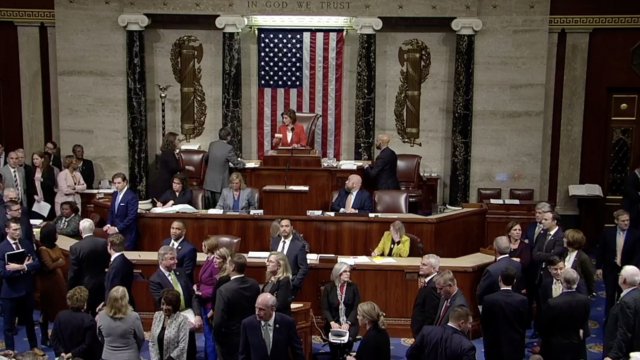 On Thursday, the House of Representatives voted to approve a resolution establishing procedures for the impeachment inquiry against President Donald Trump. But what did that vote actually mean?

The impeachment resolution mostly makes official the rules for Congress to continue its investigation of the president.

The plan allows Republicans and the White House to access documents and question witnesses both behind closed doors and in public.

It spells out how the Judiciary Committee could eventually bring articles of impeachment to the House floor.

"I don't believe this process is a fair one either," said Republican Rep. Tom Cole of Oklahoma. "It's not fair to the president, to the House of Representatives and to the American people."

The resolution also has political impacts.

It strips Republicans of their talking point of blasting Democrats for not voting to open an impeachment inquiry.

And House members are now on record for either supporting or opposing something with the word "impeachment."

Republicans will likely pin this on vulnerable Democrats, even though this was not a vote for impeachment itself.

It's also a risk for Republicans, coming out against an investigation that keeps unearthing new claims against the president with no certainty about revelations to come.

The resolution makes clear impeachment will continue to dominate the next few weeks and maybe months on Capitol Hill.