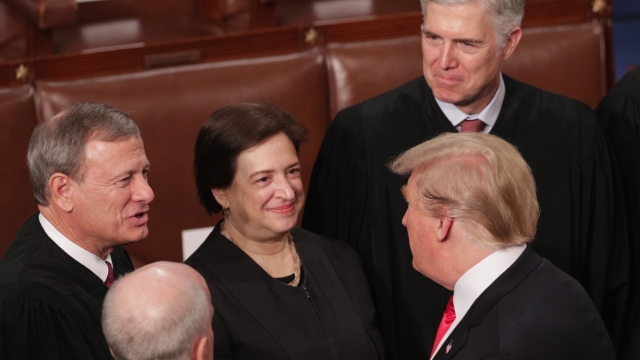 SMS
Impeachment Trial May Focus On Chief Justice's Role As 'Umpire'
By Peter Hecht
By Peter Hecht
November 6, 2019
Chief Justice John Roberts hailed his impartiality, saying, "Nobody ever went to a ballgame to see the umpire.” Umpiring impeachment may be different.
SHOW TRANSCRIPT

After President George W. Bush nominated him to serve as Chief Justice of the Supreme Court in 2005, John Roberts described his judicial philosophy with a famous analogy from America's national pastime.

He said this at his Senate confirmation hearing:

“Judges are like umpires. Umpires don’t make the rules. They apply them. The role of an umpire and a judge is critical. They make sure everybody plays by the rules. But it is a limited role. Nobody ever went to a ballgame to see the umpire.”

If President Donald Trump is impeached in the House of Representatives, Chief Justice Roberts will be the umpire presiding over his trial in the Senate. And despite his comments, all eyes will be on him, perhaps to his displeasure.

Carter Phillips, a Washington D.C. lawyer who has argued numerous cases before the Supreme Court, says: “I think [the chief justice] is going to be very uncomfortable with it. He will look the part and will act the part, but I’m sure he’d rather not have the part.”

In this speech last year, Roberts signaled his hesitancy to share the spotlight of elected politicians as well as his determination to maintain independence.

Yet as chief justice, Roberts has made presidents uncomfortable. President Barack Obama used his State of the Union speech to criticize the Roberts Court's decision that struck down campaign spending limits by defining big-money and corporate donations as free speech.

And Roberts has particularly infuriated President Trump, who called him "an absolute disaster" for joining Supreme Court liberals in upholding Obama's Affordable Care Act in 2012.

Last year Roberts issued a statement rebuking President Trump over his criticism of federal judges as politically biased. Roberts said: “We do not have Obama judges or Trump judges, Bush judges or Clinton judges. What we have is an extraordinary group of dedicated judges doing their level best to do equal right to those appearing before them.”

Trump tweeted back his outrage over appellate court decisions he called "a dangerous disgrace." He said: “Sorry Chief Justice John Roberts, but you do indeed have ‘Obama judges,’ and they have a much different point of view than the people who are charged with the safety of our country."

In the Senate, Roberts would preside over an impeachment trial in a time of extreme political polarization. His approach may be reflected in this tribute he offered for a Supreme Court ritual in which justices, liberals and conservatives, shake hands before court arguments.

"It's a small thing perhaps but it is a repeated reminder that, as our newest colleague put it, we do not sit on opposite sides of an aisle, we do not caucus in separate rooms, we do not serve one party or one interest. We serve one nation. And I want to assure all of you we will continue to do that to the best of our abilities whether times are calm or contentious.”