Impeachment Explainer: What Are The Articles Against President Trump? 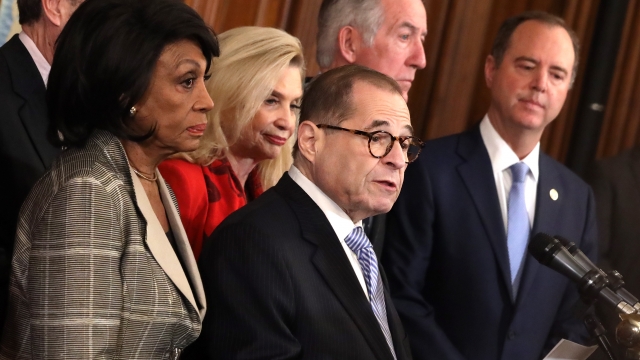 SMS
Impeachment Explainer: What Are The Articles Against President Trump?
By Ahmed Jawadi
By Ahmed Jawadi
December 11, 2019
The House Judiciary Committee unveiled two Articles of Impeachment seeking to remove Donald Trump as president. We explain the charges.
SHOW TRANSCRIPT

The House Judiciary Committee unveiled two articles of impeachment against President Donald Trump on Tuesday, marking the fourth time in American history that a president has been charged with high crimes and misdemeanors. Let's take a look at what those charges are.

The first article charges President Trump with "[abusing] the powers of the Presidency." House Democrats say the president "solicited the interference of [the Ukrainian government] in the 2020 [U.S.] Presidential election," and did so in a number of ways.

According to the charge, the president's requested favor involved Ukraine "publicly [announcing] investigations into ... former Vice President Joe Biden," as well as "a discredited theory promoted by Russia alleging that Ukraine — rather than Russia — interfered in the 2016 United States Presidential election."

The charge also alleges that President Trump ordered a freeze on hundreds of millions of dollars in U.S. security aid to Ukraine just prior to that phone call in an effort to pressure it into opening those investigations.

Acting White House chief of staff Mick Mulvaney said that was the case while speaking to reporters back in October, but later walked it back. At the time, Ukraine was facing an ongoing military conflict with Russia, which had seized Crimea and was backing rebel forces. And although "President Trump ultimately released the military and security assistance to the Government of Ukraine," House Democrats say he did so only after being "faced with the public revelation of his actions."

House Democrats allege the president instructed the officials to ignore subpoenas "to cover up [his] own repeated misconduct and to seize and control the power of impeachment." They added: "In the history of the Republic, no President has ever ordered the complete defiance of an impeachment inquiry or sought to obstruct and impede so comprehensively the ability of the House of Representatives to investigate 'high Crimes and Misdemeanors.'"

House Democrats ultimately conclude that, due to President Trump's alleged actions, he should be tried, removed from office, and disqualified from holding "any office of honor, trust, or profit under the United States."