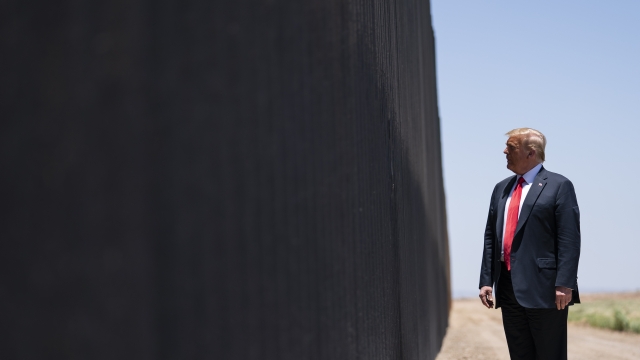 SMS
Immigration Dominated 2016 Election But Neglected In 2020 Contest
By Ben Schamisso
By Ben Schamisso
October 22, 2020
The issue helped President Trump win the White House and largely defined his presidency. But it's been overlooked this election year.
SHOW TRANSCRIPT

President Trump's hard-line immigration stance helped him win the White House four years ago. But in 2020, the president has put the issue somewhat on the back burner.

"It basically shows how dominant the pandemic as an issue is this year," said Muzaffar Chishti, the director of the Migration Policy Institute at New York University School of Law.

The coronavirus, the economy and protests over racial injustice have relegated immigration to the bottom of issues voters care most about.

The lack of attention to immigration is also the president's own doing.

"A lot of the policies that the Trump administration has put in place, like them or not, have decreased the number of people trying to attempt crossing at the border. So it's not a front-of-mind issue for a lot of voters," said Theresa Brown, a former Homeland Security official who's now director of immigration and cross-border policy at the Bipartisan Policy Center.

President Trump still boasts about his signature border wall at campaign rallies and many of his campaign ads attack Joe Biden's immigration platform.

But his painting of immigrants as criminals has been subdued — if not recycled —  by his more dominant "law-and-order" rallying cry.

"Anybody who's been paying attention probably would see some linkages between the two," said Brown.

The fact that journalists didn't bring up a single immigration question during the debates further downplays the issue.

That seems to suit the Biden campaign just fine.

"Immigration is not as much of a base-driving issue for Democrats as it is for Republicans," said Brown.

A recent Newsy poll of moderate voters in swing states finds that Biden's liberal stance on immigration is more a liability than an asset.

"There's a lot of Americans that are concerned about their futures and use immigration as a scapegoat for economic and security problems," said Sarah Pierce, a policy analyst at the Migration Policy Institute.

Even though immigration has been largely ignored this election year, the stakes couldn't be higher.

And Biden has promised to quickly roll back most of these actions and advance his own immigration platform.