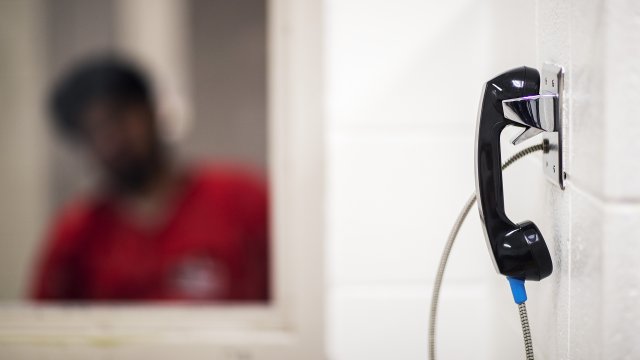 SMS
Immigrant Advocates Call On ICE To Release Vulnerable Detainees
By Ben Schamisso
By Ben Schamisso
March 24, 2020
They are calling for the release of elderly people, pregnant women and those with compromised immune systems to protect them from the coronavirus.
SHOW TRANSCRIPT

As the coronavirus spreads quickly across the country, immigrant advocates and attorneys are calling on ICE to release vulnerable people from detention. Unlike prison officials, who have to hold inmates on judges' orders, ICE has the authority to release detained immigrants awaiting deportation or asylum hearings.

"Our association is engaging with ICE to talk about enforcement ops during this horrible period of time, about using its own bond and parole authority to release individuals, especially those that are at risk — elderly, or individuals that have compromised immune systems," said Jeremy McKinney, Second Vice President of the American Immigration Lawyers Association.

For now, ICE is holding around 40,000 immigrants in more than 130 facilities nationwide — including in local jails and private prisons. The agency says there are no confirmed cases of coronavirus among detainees, though a medical staff member at a New Jersey facility tested positive last week. It's unclear how many detainees have been tested.

Separately, around 3,600 immigrant minors are in the custody of the Office of Refugee Resettlement or ORR. These children either crossed the U.S.-Mexico border alone or were separated from adults there. They remain in government shelters until they can be placed with "sponsors," often family members already residing in the U.S.