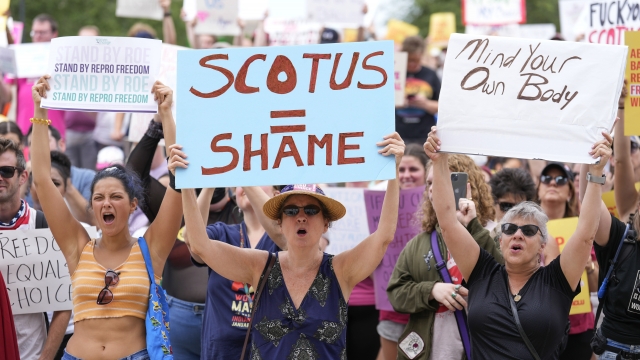 Lawmakers in some states have been preparing for the possibility of roe being overturned for years.

North Dakota’s “trigger" law, for example, was approved by the state legislature 15 years ago.

In Louisiana, in anticipation of the Supreme Court’s decision, the “trigger" law was updated just a few days ago.

"Just knowing what's going to happen, the deaths and the poverty rates, how my fellow legislators and the governor and other people don't see that just blows my mind," said Louisiana State Rep. Mandie Landry.

In Kentucky, the so-called "trigger" law was passed in 2019 and allows abortion only to save the life of the mother or prevent a disabling injury.

Addia Wuchner is the executive director of Kentucky Right to Life, a group that has long advocated for the end to abortion.

"We still have many issues to deal with—mail order abortions, very risky business, but for right now, we're going to celebrate and then we'll begin to work through the process in the days ahead," said Wuchner.

At least 20 states are poised to ban the practice of abortion.

Other states like Wisconsin, Michigan and Arizona have pre-Roe abortion bans still on the books that could potentially go into effect without action from local lawmakers.

Meanwhile, many blue states are pushing in the opposite direction. Codifying Roe in state law and working to serve as a safe haven for women seeking abortion care.

"We will not aid, we will not abet in their efforts to be punitive, to fine and create fear for those that seek that support," said California Governor Gavin Newsom.

California Governor, Gavin Newsom, immediately signed a legislation aimed at protecting women, doctors, and others who assist with abortions from civil lawsuits by states where abortions are banned.

As it stands in Texas, the "trigger" law will go into effect in 30 days.

"After this opinion, for folks on the pro-life view, this is not a time to gloat. This is a big deal, this is serious. This is a time for us to show love, to reach out to Americans who see this issue differently than we do," said Texas Sen. Bryan Hughes.

Doctors could face life in prison and fines of up to $100,000 if abortions are performed.