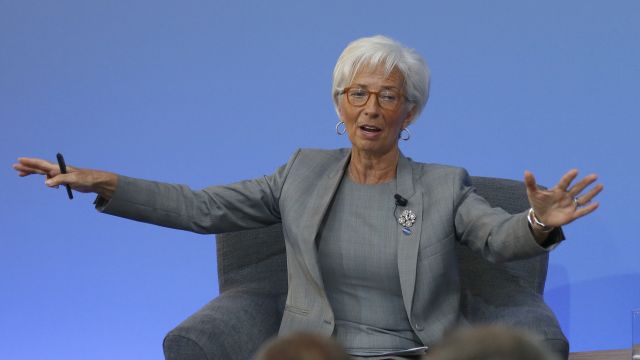 It looks like Christine Lagarde won't be losing her job as the head of the International Monetary Fund despite the fact that she was just found guilty of financial negligence.

Lagarde's conviction stems from her time as France's minister of finance, when she declined to investigate a shady $400 million compensation payment to French businessman Bernard Tapie. A court ordered Tapie to repay the $400 million last year.

Despite her conviction, Lagarde won't face any jail time or a financial penalty. And the IMF says it's not worried about the ruling, either.

The institution's board said Monday it "reaffirms its full confidence" in Lagarde and "looks forward to continuing to work with [her] to address the difficult challenges facing the global economy."

The IMF is best known as a fund to help countries struggling with debt payments, but it also works to prop up international trade and finance, as well as to help the economies of its member nations grow.

SEE MORE: Cash Programs For The Poor Seem To Pay Around The World

The board re-elected Lagarde to a second five-year term as managing director in February. Lagarde and her supporters repeatedly characterized the case against her as politically motivated.

Still, this isn't really a good look for the IMF. Lagarde is now the agency's third head in a row to face criminal charges at some point in their career.