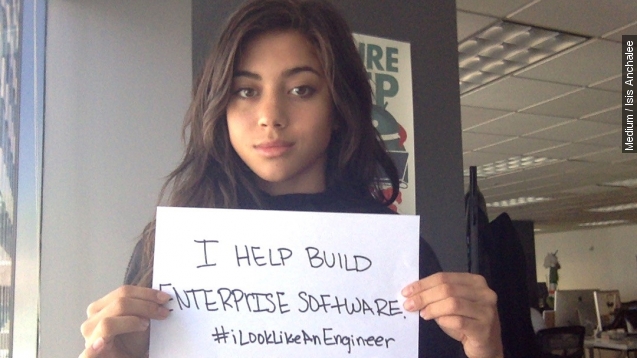 SMS
#iLookLikeAnEngineer Movement Grows Into Ad Campaign
By Kate Grumke
By Kate Grumke
August 7, 2015
A hashtag used to fight stereotypes in STEM fields is quickly growing into a fundraising campaign for a billboard.
SHOW TRANSCRIPT

The Twitter hashtag #iLookLikeAnEngineer, which sparked photos of engineers who don't fit stereotypes, is now transforming into more than just a social media movement. It's raising money for a billboard and ad campaign.

It all started after OneLogin engineer Isis Wenger Anchalee was featured in a recruiting ad for her company. She told NPR she later found out the ad was getting some negative attention on social media, and it brought up some of the diversity issues in science, technology, engineering and math fields.

"Guys were like, 'I wonder what people with brains think about how plausible this actually is, that this is what female engineers would look like?'" said Wenger Anchalee.

She wrote an essay about the experience on Medium, saying, "This industry's culture fosters an unconscious lack of sensitivity towards those who do not fit a certain mold. ... The negative opinions about this ad that strangers feel so compelled to share illustrate solid examples of the sexism that plagues tech."

Now instead of just a hashtag, the movement is raising money for real ads. An Indiegogo campaign to buy a billboard featuring #iLookLikeAnEngineer more than doubled its goal in just two days of fundraising.

To learn more, go to the movement's website, www.ilooklikeanengineer.com.