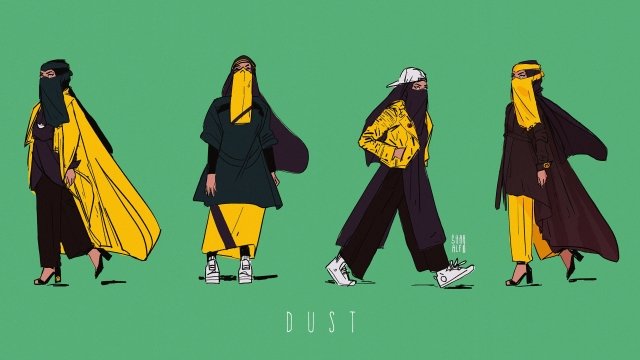 It's pretty common for fan-favorite comic book characters to get an updated look. This image of Marvel's Dust character seemed off to comic book fan and illustrator Sara Alfageeh, so she created her own update of the X-Men character — one without the skintight abaya.

"For me, I had the same way I tackle any type of illustration I do: I do the research. ... That was looking at Instagram, it was looking at Pinterest, it was looking at fashion blogs, it was seeing what Muslim women were already putting themselves out there in. I was thinking also in terms of, OK, well, this has to be a practical outfit. She's a superhero. She's going places, she's doing stuff. And so how do I balance this more fashionable aspect with this more practical aspect? And then on top of that, I loved the original, iconic yellow and blue of the X-Men series," Alfageeh said. 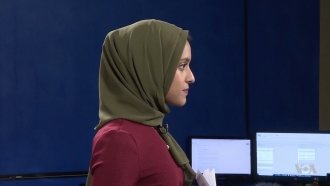 Shortly after posting her artwork to Twitter, it went viral.

Alfageeh said: "One of the most validating responses I've gotten to the artwork is other women being like, 'I want that for my closet, I want to dress like that or have that outfit.' ... That's what real representation looks like."

But it wasn't just the design that struck Alfageeh. For example, Dust's character is from Afghanistan, yet the comics show Dust speaking Arabic, which isn't one of the two official languages in the country.

"Dust is honestly a summary of uninspired and lazy writing. … She just didn't really have much to offer besides the fact that she's the X-Men Muslim superhero, that's it. That's where they stopped writing her, and I think the bar just needs to be so much higher than that. You need to create a good character first before you start checking off your diversity quota," Alfageeh said.

Dust isn't the only female Muslim comic character, but Alfageeh has some advice for getting these types of characters portrayed more accurately

"The first step is to forget that you're creating this Muslim character. We're not 100 percent defined by how we visibly represent ourselves or by our faith. … Focus on making a good story, and then ... make sure you know who's in your audience and that you're speaking directly to them," Alfageeh said.