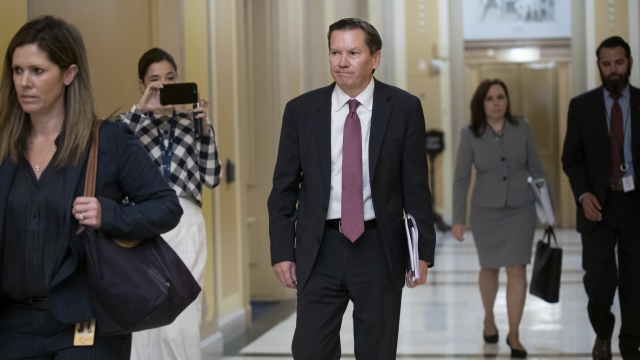 Michael Atkinson, the inspector general of the intelligence community, issued a statement after the president announced he was firing him.

Michael Atkinson, the inspector general of the intelligence community who told Congress about the whistleblower complaint that led to President Donald Trump's impeachment, defended himself in a letter Sunday.

The letter comes after the president sent a letter to Congress saying he will fire Atkinson after a mandatory 30-day waiting period.

"I thought he did a terrible job, absolutely terrible," President Trump said. "He took a whistleblower report, which turned out to be a fake report. It was fake. It was totally wrong. It was about my conversation with the president of Ukraine. He took a fake report, and he brought it to Congress."

Atkinson was the one who deemed the complaint about President Trump pressuring Ukraine to investigate former Vice President Joe Biden and his son as "urgent." The House launched an impeachment inquiry against the president and voted to impeach him. The GOP-led Senate acquitted him.

The president said he was letting Atkinson go because he didn't have his "fullest confidence," but in the letter Atkinson said it's "hard not to think that the President's loss of confidence in me derives from my having faithfully discharged my legal obligations as an independent and impartial Inspector General, and from my commitment to continue to do so."

He also urged other government employees to "bravely speak up."

The president hasn't said who will take Atkinson's place.