If You Really Love Hemingway, You'd Join These Look-Alikes 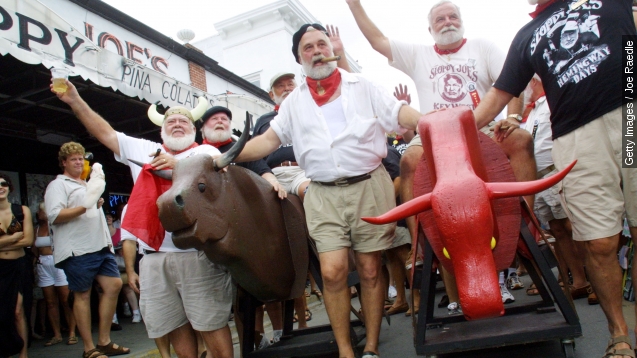 SMS
If You Really Love Hemingway, You'd Join These Look-Alikes
By Ryan Biek
By Ryan Biek
July 26, 2015
If you can't be him, join them. An Ernest Hemingway look-alike contest in Key West, Florida, crowned its 35th winner at Sloppy Joe's bar.
SHOW TRANSCRIPT

Ernest Hemingway's larger-than-life personality and adventures have inspired countless men to emulate him. Some just take the emulation a little further than others.

This year, Florida's own Charlie Boice beat 121 other contestants at an annual "Papa" Look-Alike Contest in Key West.

It only took him 15 years to grab the title, but Boice told WFOR, "When you're hanging around with guys like this all the time, … I would do it for another 15 years."

This marks the contest's 35th year; past winners are usually judges.

It's become such a tradition there's a Hemingway Look-Alike Society that's donated over $150,000 in scholarships to students in the Florida Keys.

The competition is a part of the city's Hemingway Days celebration that happens every year around the author's birthday on July 21. The festival kicks off with a much safer, and far more hilarious, version of the Running of the Bulls.

With the next contest a year away, there's still plenty of time to grow that beard.

This video includes images from Getty Images and The John F. Kennedy Presidential Library and Museum and music from Kevin MacLeod / CC BY 3.0.