If The Oceans Keep Heating Up, Ocean Life Could Stop Making Oxygen 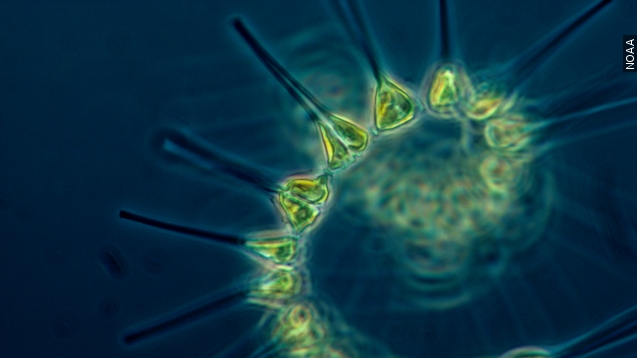 SMS
If The Oceans Keep Heating Up, Ocean Life Could Stop Making Oxygen
By Steven Sparkman
By Steven Sparkman
December 1, 2015
Tiny organisms called phytoplankton make more than half of the oxygen in our atmosphere, but a new study says warmer oceans could put an end to that.
SHOW TRANSCRIPT

There are a lot of climate change predictions that sound like doomsday scenarios, and most of them involve the ocean.

We've all heard how a rising ocean could swallow up miles of coastline or how a warmer, more acidic ocean could lead to mass die-offs among sea creatures. (Video via NASA)

Now there's a new threat to add to the list: a warming ocean actually robbing us of breathable air.

University of Leicester researchers are pointing at phytoplankton, tiny organisms that live in the ocean, as another way for a changing climate to bring about disaster. (Video via NASA)

You may have grown up thinking the oxygen we breathe comes from forests and jungles, but at least half of all oxygen in the atmosphere the comes from phytoplankton.

The researchers used mathematical models to predict how warmer oceans would affect the tiny plants and found that oxygen production would completely halt if ocean temperature rose by 6 degrees Celsius, which, as they put it, "obviously can kill most of life on Earth."

That's terrifying, but luckily the researchers are upfront about the limitations of their work. They say this initial study isn't about pinning down exact numbers but about sparking more research into a part of climate change that had been overlooked.

It's also worth pointing out that an increase of 6 degrees Celsius is pretty much game over, anyway. That's the number often held up as the worst case scenario, with drought, heat, flooding or extreme weather making most of the planet uninhabitable. (Video via NASA, National Geographic)

Six degrees Celsius is also hotter than most climate change models predict we'll see in the next century.

This video includes images from NOAA and NASA.