If Prostheses Were Shoes, They'd Have Been Updated Already 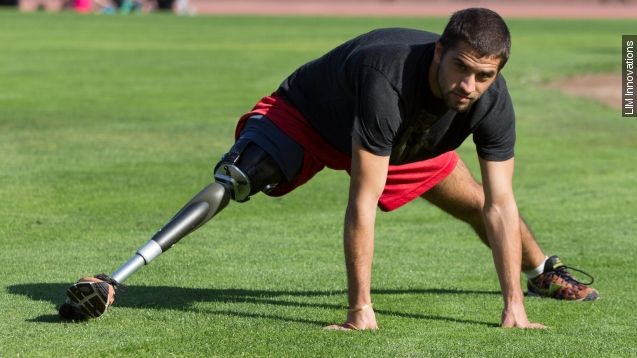 SMS
If Prostheses Were Shoes, They'd Have Been Updated Already
By Leah Becerra
By Leah Becerra
January 14, 2016
Not every company at CES was pushing a new app or cool gadget. LIM Innovations has a wearable of sorts that's improving the lives of amputees.
SHOW TRANSCRIPT

What if I told you prostheses are technology, too? Not only that, but the companies trying to make these devices better are attending events like CES.

In the case of lower limb prostheses, there's a problem that needs to be addressed.

That's the part of a prosthesis that merges a person's residual limb and their prosthetic limb. Older sockets don't allow room for adjustment in that area. (Video via BulowOPS / CC BY 3.0)

Imagine trying to run, dance or even just relax while wearing an archaic wooden shoe. Doesn't sound comfortable, right? Now, imagine relying on outdated technology every day to do something as simple as walking to your car. (Video via Oxlaey / CC BY 3.0)

At CES, we talked to LIM Innovations, a company out of San Francisco that's been selling — let's call them — dynamic prostheses for about a year. They call it the "Infinite Socket."

"When I wake up and go to the gym, I can tighten it down all the way, as opposed to when I'm sitting at my desk all day for — you know — nine hours, on a hard chair, I can loosen it up," said Ranjit Steiner, an amputee who works for LIM Innovations.

Research shows that prosthetic rejection and abandonment can be well over 50 percent, and a lot of times, it's due to the wearer being uncomfortable.

The difference in this newer design is its adjustability, which actually combats more than just the comfort issue. The adaptability could even save people money.

"A traditional socket like this is billed to insurance for approximately $10,000," Pedtke said.

But that's just one socket. And it's not uncommon for an amputee to end up needing multiple sockets before being fitted with a definitive socket.

"And the total cost that Medicare is seeing for socket technology alone in a yearly basis is about $375 million," Pedtke said.

That's a lot of money and a lot of potentially uncomfortable people who are just trying to enjoy life.

"A traditional socket is like dancing in high-heeled shoes and then having to walk all the way home at the end of the night — like, you're going to get blisters; it's going to suck," Steiner said.

Currently, LIM Innovations can fit its Infinite Socket for any above-the-knee and through-the-knee amputees. The story transcript has a link to the company's site for more information on its prostheses.