Icy Conditions Cause Massive Pileups Across The Country 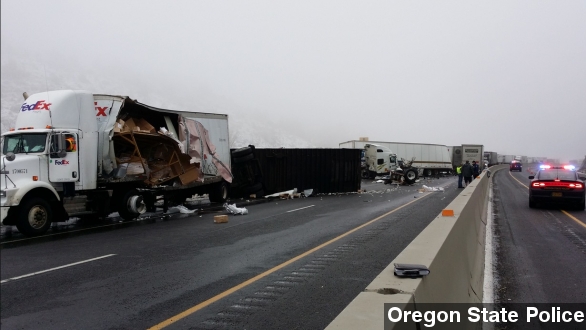 SMS
Icy Conditions Cause Massive Pileups Across The Country
By Katherine Biek
By Katherine Biek
January 19, 2015
Hundreds of accidents occurred over the weekend as freezing rain caused ice to form on roadways.
SHOW TRANSCRIPT

Parts of the Northeast were flooded with rain and ice, causing dangerous accidents on Sunday.

In Philadelphia, WPVI says a crash along Interstate 76 ended with a massive pileup involving around 56 vehicles. One man died after he got out of his car and was struck by another. Police say more than 30 others were injured.

And two other men died when a tractor trailer jackknifed on I-476 on the outskirts of Philadelphia. WCAU says the men died because they were unable to stop their cars from crashing head-on into the trailer.

On Sunday, The Weather Channel announced freezing-rain advisories for about 32 million people in the Northeast.

"Take a look at Philadelphia here. Once we got down below 32 degrees, we got over a tenth of an inch of ice and that is critical," The Weather Channel's Tom Niziol explained.

In Connecticut, an elderly woman died after losing control of her car and crashing into a utility pole. Other pileups were reported in New Jersey.

In fact, road conditions where so dangerous, New Jersey State Police told people to stay home on Twitter, later tweeting a total of 428 accidents had been reported Sunday.

Ice hit other parts of the country hard as well this weekend.

In Oregon, 12 people were injured in a massive pileup Saturday night involving 50 to 70 vehicles near Baker City.

This icy cold front is expected to remain in place Monday. The Weather Channel says drivers in the Northeast should be cautious when out on the road, as black ice may have developed overnight.