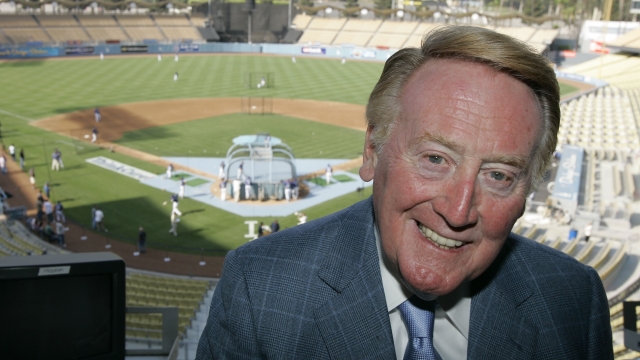 Long before becoming a Hall-of-Fame broadcaster, Vin Scully was a boy listening to sports on the on the radio — hearing magic.

"What intrigued me and thrilled me was the roar of the crowd," Scully said.

Scully joined the Dodgers in 1950. He moved with the team from New York to LA eight years later and stayed for 67 years. It's the longest run with the same team in pro sports history.

"Now the one-one pitch and Bagwell hits a chopper to third," Scully said.

He called them some of the most historic moments in baseball.:

"In a year that has been so improbable, the impossible has happened," he said.

The New York Mets in 1986, making a World Series comeback.

"What a marvelous moment for the country and the world. A Black man is getting a standing ovation in the deep south for breaking the record of an all-time baseball idol," Scully said.

He once won a landslide poll of LA Times readers, naming him the biggest icon in LA sports history. He retired in 2016.

"I've needed you far more than you've needed me," he said.

But at 94 years old, he was still on Twitter telling stories.

"As Larry ran around the bases, I could not believe, a-billion-to-one shot has occurred directly in my lap. That's the one i will never forget," Scully recalled.

"If I have a trademark, it would be to call the play as quickly and as and as accurately as I possibly can, and then shut up, and listen to the roar of the crowd. And to this day, when that crowd roars, I'm that little eight year old back in New York City listening to Alabama and Tennessee," Scully said.