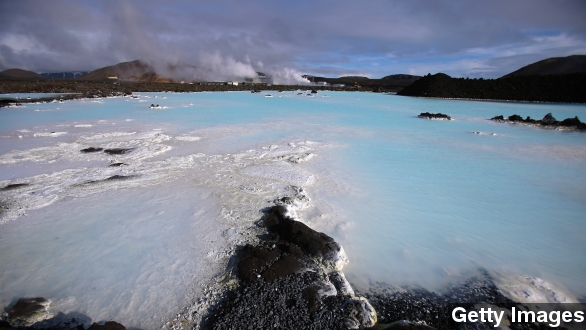 SMS
Icelandic Volcano Alert Level Raised, Starts Erupting
By Jake Godin
By Jake Godin
August 23, 2014
An Icelandic volcano has started sub-glacier eruptions and may be on the verge either causing floods or shooting ash in the air, no one is quite sure.
SHOW TRANSCRIPT

Hot springs, glaciers, Sigur Rós, ice, volcanoes ... Iceland is known for all of this. Unfortunately, it's those last two that may soon become a problem for the Nordic country.

The Icelandic Met Office upgraded the threat level of its largest volcano — Bárðarbunga, from orange to red on Saturday after something called a sub-glacial eruption was detected. (Video via VTM Nieuws)

According to the Iceland Review, we can't see an eruption taking place when its sub-glacial since it's all underneath the ice.

But, according to the Met Office, visible signs could start appearing. They estimate that within a day lava may start to reach the surface. Or, it won't reach the surface at all. (Video via YouTube / potzdonner)

The most recent update from an Icelandic geologist who has been regularly following the volcano notes the volcanic activity "could die down, even temporarily, or it could get stronger." There it is again, that same uncertainty.

A British volcanologist attempted to clear things up with The Conversation on Monday by listing three scenarios, depending on where the eruption occurs and how much magma comes out.

If only a small amount of magma is released underneath thick ice, flooding may occur in the surrouding area. If there's a lot of magma coming out under thick ice, then a smoke plume will form, but it won't be too problematic for air travel. If the magma comes out somewhere else that's not underneath ice, then we get explosions.

And, before you start having flashbacks to the eruption of that one, unpronounceable volcano in 2010, there's no reason to start freaking out just yet.

A science writer at Volcanocafé notes that, given the possible scenarios, this is more likely to be the kind of eruption you'd see in Hawaii as opposed to the ashy eruption from 2010.

That eruption, according to the BBC, caused the largest closure of European airspace since World War II.

A science writer told National Geographic that some of Iceland's worst eruptions happened in 1104 and 1783, with the latter putting out more than 100 million tons of sulfur dioxide that ended up covering much of Europe.

In comparison, a little smoke from this volcano doesn't sound nearly as bad. The sub-glacial eruption is currently being monitored on multiple fronts, including a livestream and a github website giving live updates on seismic activity.