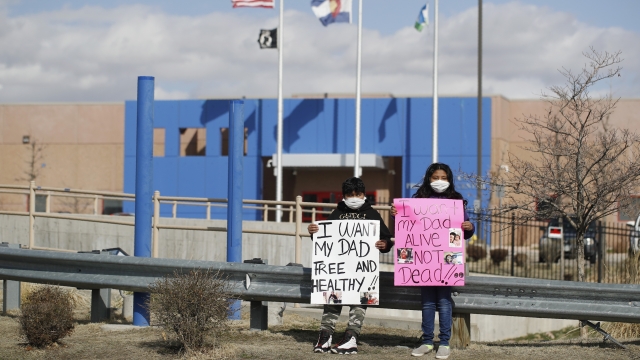 SMS
ICE Releasing High-Risk Detainees In Effort To Curb Coronavirus
By LeeAnne Lowry
By LeeAnne Lowry
April 8, 2020
The agency says it has reviewed the cases of 600 people who are pregnant or over 60 years old and released 160 of them.
SHOW TRANSCRIPT

Immigration officials are releasing some detainees in an effort to curb the coronavirus at detention facilities.

ICE said in an email to lawmakers on Tuesday that it is examining the cases of detained migrants who are at increased risk of contracting the virus. So far it's reviewed the cases of 600 people who are pregnant or over 60 years old and released 160 of them.

One migrant who has been held for eight months while requesting asylum told USA Today there are no social distancing procedures in her processing center. She told the outlet that guards don't use gloves or masks, and over 70 detainees share five bars of soap.

ICE's website says it's reduced capacity in all facilities to 75%. It also says it houses high-risk detainees apart from the rest of the population, and people with symptoms are placed in isolated rooms.