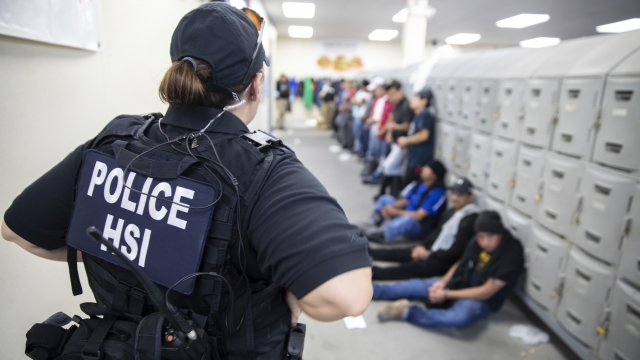 SMS
ICE Releases Around 300 Undocumented Workers After Massive Raid
By LeeAnne Lowry
By LeeAnne Lowry
August 9, 2019
The Department of Justice said some of the releases were for humanitarian reasons.
SHOW TRANSCRIPT

U.S. Immigration and Customs Enforcement said by Thursday morning, it released hundreds of people detained in a massive operation on Wednesday.

ICE officers detained around 680 undocumented workers in the raid in Mississippi. A federal prosecutor said the raid on multiple food processing plants was the "largest single-state immigration enforcement operation" in U.S. history.

"While we are a nation of immigrants, more than that we are first and foremost a nation of laws," said Mike Hurst, U.S. Attorney for the Southern District of Mississippi.

Authorities released around 300 people. Many of them received notices to appear before an immigration judge. Even though those people aren't being detained, they're unlikely to keep their old jobs because of their immigration status.

In a statement on Thursday, the Department of Justice said some of the releases were for humanitarian reasons. The department said officers asked each person whether they had children at home. Then, any child that was left without a parent after the raid had one parent released.

According to the Associated Press, ICE also said it released more than a dozen detained workers because they themselves were children — one as young as 14.