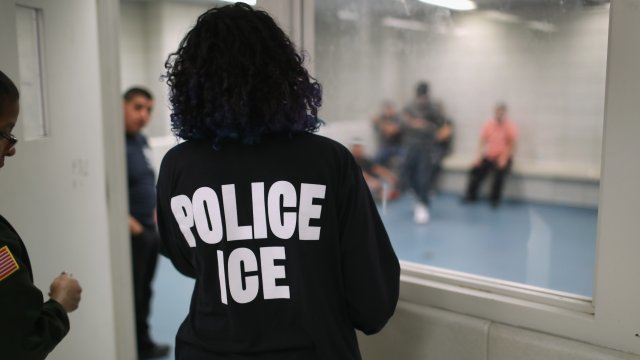 By Ben Schamisso
December 13, 2018
ICE says the arrests are an effort to safely place migrant kids. But critics say the crackdown is scaring parents from claiming their children.
SHOW TRANSCRIPT

Between July and November this year, ICE arrested 170 undocumented immigrants as they attempted to claim migrant children who are in government custody. That's according to new data provided by the agency.

109 of the 170 adults arrested had no criminal records and had only committed immigration violations.

Immigrant advocates say these arrests are concerning because they discourage undocumented parents and relatives from claiming some of the nearly 15,000 migrant children currently in detention.

California Democratic Senator Kamala Harris told the San Francisco Chronicle, "It’s outrageous. I don’t know if this is intended or unintended, but a natural consequence of this is that these children will have nowhere to go."

An ICE spokesperson stressed that for relatives to encourage a child to migrate to the U.S. by themselves "is prosecutable as a federal felony, and only enriches transnational smuggling organizations that undermine U.S. border security efforts."

He also pointed out that out of the 25,000 potential caretakers that ICE conducted background checks on in the past five months, 80 percent are believed to be in the country unlawfully.

But immigrant rights groups blame the arrests on a controversial agreement to share information between ICE and the Office of Refugee Resettlement, or ORR.

Since April, ORR caseworkers have provided ICE with names and fingerprints of potential sponsors as well as all adult members of children's households. In the past, that information was not commonly shared.

While the agreement is meant to protect children by weeding out dangerous applicants, the advocates say it actually "undermines family reunification ... by turning safe placement screening into a mechanism for immigration enforcement."