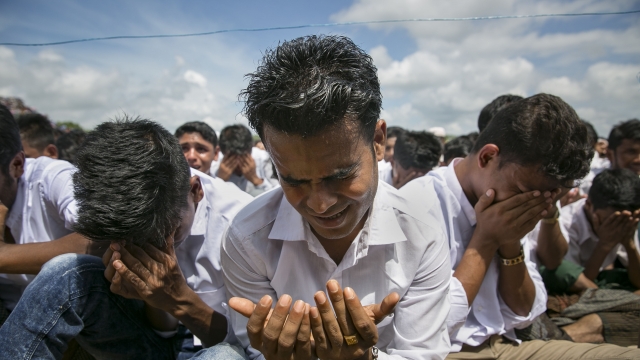 On Thursday, International Criminal Court judges approved a full investigation into alleged crimes committed against Myanmar's Rohingya Muslims. It's the second such move made this week against Myanmar, which has faced mounting scrutiny over its alleged abuse of the Rohingya.

Thursday's ruling follows a request by ICC chief prosecutor Fatou Bensouda of Gambia, which filed the case on behalf of the 57 member states in the Organisation of Islamic Cooperation. She said the decision was a "a significant development" that would send "a positive signal to the victims of atrocity crimes in Myanmar and elsewhere."

Since 2017, thousands of Rohingya Muslims have died and at least 700,000 have fled to neighboring Bangladesh amid persecution and alleged ethnic cleansing. Last year, U.N. investigators said officials involved in the 2017 military crackdown in Myanmar should be charged with genocide, and it called on the U.N. Security Council to refer the case to the ICC.

Myanmar is not a member of the ICC, but the court ruled last year that it has jurisdiction over crimes against the Rohingya because Bangladesh is a member. Myanmar and Gambia are party to the 1948 Genocide Convention, which requires all signatory states "to prevent and to punish" the crime of genocide.

In May 2018, Gambia's AG and Justice Minister Abubacarr Tambadou visited a Rohingya refugee camp in Bangladesh. He told The Washington Post that the stories he heard there reminded him of his work as a lawyer for the U.N.'s tribunal on the 1994 Rwandan genocide.

He said: "As I listened to the horrific stories — of killings, of rape, of torture, of burning people alive in their homes — it brought back memories of the Rwandan genocide. The world failed to help in 1994, and the world is failing to protect vulnerable people 25 years later."