John Hyten Confirmed As No. 2 General After Sexual Assault Allegations 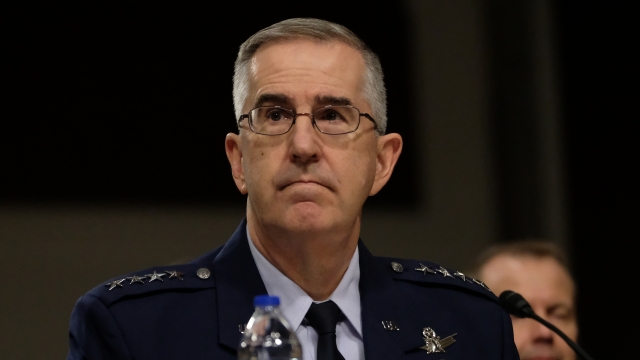 On Thursday, Gen. John Hyten was confirmed as the No. 2 military official in the country. This follows months of controversy over sexual assault allegations against the general.

The Senate approved Hyten to be the vice chair of the Joint Chiefs of Staff in a 75-22 vote. Armed Services Committee Chairman James Inhofe said the panel "takes allegations of sexual assault very seriously and has for many years," but that "we can't stop a nomination from going forward on unproven allegations, especially ones we examined with the utmost of care and close scrutiny and determined not to have merit."

Hyten previously served as U.S. Strategic Command chief. His former aide, Army Col. Kathryn Spletstoser, accused him of making unwanted sexual advances toward her. She alleges he kissed, hugged and rubbed against her in 2017 when they worked closely together. She also says he ejaculated on her.

In July, Hyten told the committee that "these allegations are false" and that "nothing happened, ever."

The Air Force Office of Special Investigations went through 10,000 pages of documents and interviewed as many as 50 people, but concluded there was neither evidence of sexual misconduct nor evidence that Spletstoser was lying.

Spletstoser said in a statement: "Unfortunately, my experience has only served to demonstrate how unequipped the military still is to deal with sexual assault. The process for seeking justice has been a sham."