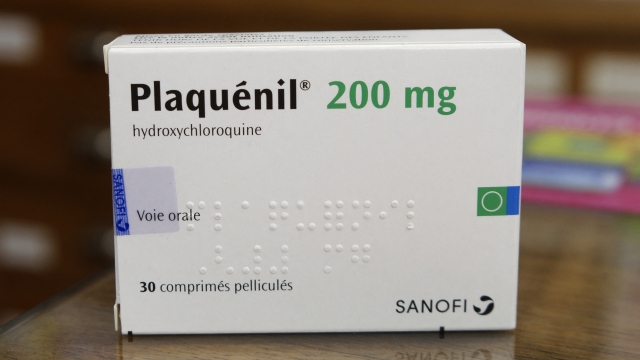 "Throughout the week I was just full of anxiety. Like, will I be able to have this medication that keeps me alive? You know what I mean? So, it's been tough," said Karley Garbriel, who currently lives with systemic lupus erythematosus, the most common form of lupus.

Karley Gabriel is one of roughly 1.5 million Americans with lupus and one of many who have struggled to obtain hydroxychloroquine — the drug she has been taking twice a day for the past 12 years to keep her lupus under control — after President Trump touted the medicine and its sister drug, chloroquine, as possible treatments for coronavirus.

"At my direction, the federal government is working to help obtain large quantities of chloroquine," President Trump said during a White House briefing. "We think tomorrow, pretty early, the hydroxychloroquine and the Z-Pak, I think, is a combination, probably, is looking very, very good, and it’s going to be distributed."

The two drugs, often sold under the brand names Aralen and Plaquenil, are most commonly used to treat lupus, rheumatoid arthritis and malaria. They're only available with a prescription and are not approved by the FDA to treat COVID-19. Still, a surge in demand has created a shortage and prompted pharmacists, nurses and patients from coast to coast to share their concerns online using the hashtag #WithoutMyHCQ.

Pharmacy boards across the country say doctors are stockpiling the drugs, writing prescriptions for family, friends and coworkers in case they get the coronavirus — even though there is little evidence that the medicines work to treat it. Clinical trials are underway. Those with prescriptions have asked their doctors for 90-day supplies or an early refill, but early refills can cost patients a few hundred dollars out of pocket.

To prevent hoarding, 23 states so far have issued new guidelines on how the drugs can be dispensed at pharmacies, according to an analysis by Newsy.

And the American College of Rheumatology, the Lupus Foundation of America, the Arthritis Foundation and the American Academy of Dermatology have issued a joint statement calling on Vice President Mike Pence, who's heading the White House Coronavirus Task Force, to address the drug shortages.

"If I didn't have contact with this one pharmacy, the other best bet that I had with getting medication was maybe April 15, and even then I was maybe ninth on the list of the people who were waiting for this medication," said Gabriel.

"Health plans can and should be ... setting aside and purchasing some supplies for their patients for whom we know these treatments are beneficial. And, looking ahead, the federal government working with manufacturers of treatments like chloroquine to increase supply as rapidly as possible," said Dr. Mark McClellan, the director of the Robert J. Margolis Center for Health Policy at Duke University. "These are exactly the kind of shortages we need to get ahead of as much as possible right now."

The FDA told Newsy it is "actively evaluating market demand" and "working with manufacturers to increase production."