A Record Number Of Women Are Now In The US Senate 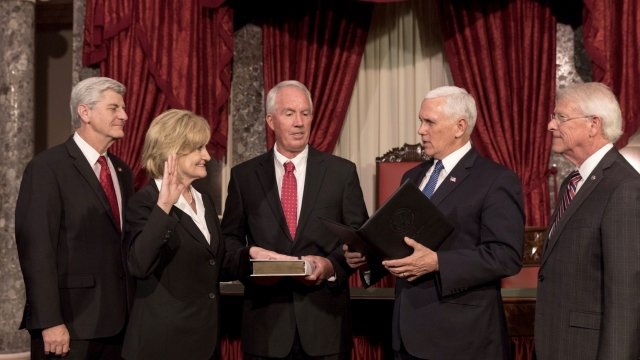 SMS
A Record Number Of Women Are Now In The US Senate
By Katherine Biek
By Katherine Biek
April 10, 2018
Cindy Hyde-Smith from Mississippi became the historic 23rd female senator currently serving when she was sworn in Monday.
SHOW TRANSCRIPT

The U.S. Senate returned to work this week with a record number of female lawmakers.

Cindy Hyde-Smith, a Republican from Mississippi, became the 23rd woman to serve in the current Senate when she was sworn in Monday.

Hyde-Smith was appointed to temporarily fill former Sen. Thad Cochran's seat. He resigned earlier this month because of health issues.

Hyde-Smith — who once was Mississippi's commissioner of agriculture and commerce — is the first woman to represent the Magnolia State in the upper chamber of Congress.

She's filling the Senate seat until the November special election, which will decide who will serve the remainder Cochran's term. Hyde-Smith is one of four candidates on the ballot so far.