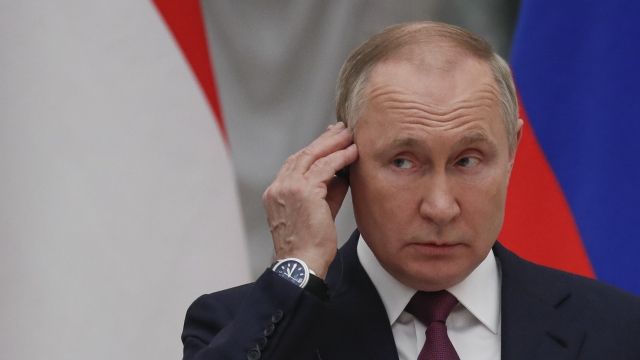 On Tuesday, the Russian military released video of mobile hospitals it's erecting near the Ukranian border — part of an overt messaging campaign of Russian readiness for battle.

But covertly, according to western military analysts, a war has already begun — a so-called "hybrid warfare" — a Russian offensive targeting Ukrainian hearts and minds.

"...Where they sow misinformation or disinformation and try to increase sort of, you know, social chaos and distrust and discord," said Michael Daniel, former cybersecurity coordinator at the U.S. National Security Council.

The term "hybrid warfare" originates from a 2007 academic article that defines it as the fusion of conventional capabilities, terrorist acts and criminal disorder. Recent events in Ukraine, say experts, appear to be textbook examples.

In mid-January, a major cyberattack against Ukrainian government websites posted a warning saying, "Ukrainians!... All information about you has become public, be afraid and expect worse."

A week later, Ukrainian media outlets reported that bomb threats were paralyzing schools across country. Roman Osadchuk, a researcher at the Atlantic Council's Digital Forensic Research Lab, said some schools went to distance learning after being evacuated three days in a row.

NEWSY'S JASON BELLINI: What would be the objective of something like that?

ROMAN OSADCHUK: Panic and irritation. It erodes trust in the government as well.

Ukrainian security services released video and images of a person they claim is one of the perpetrators and linked him to the Russian military.

Though Russia denies involvement in the cyberattack and bomb threats, Ukraine’s foreign minister accuses Russia of trying to destabIlize Ukraine’s fragile democracy from within.

"By putting pressure on [the] Ukrainian financial system, by conducting cyberattacks against Ukraine, this is also part of the Russian plan of aggression," said Dmytro Kuleba, foreign minister of Ukraine.

"When the Russians talk cyber, they're talking information warfare. A big part of that is perception management and psychological operations," said Frank Cilluffo, director of Auburn University's McCrary Institute for Cyber and Critical Infrastructure Security.

Analysts say Russia is trying to create the perception, among the Ukrainian citizenry, that their leaders are the incompetent puppets of anti-Russian western powers.

"The U.S. is actually controlling Ukraine because Ukraine is under external control, and it pushes Ukraine towards an aggression towards Russia," Osadchuk said.

It’s a message advanced, experts say, by a cyber-army of Russians acting on orders to flood social media with disinformation — a long-standing part of Russian President Putin's playbook.

"They have developed, and, in some ways, perfected hybrid war. The Russians cannot match the U.S. in force; they have developed asymmetric power," said Leon Panetta, defense secretary during the Obama administration.