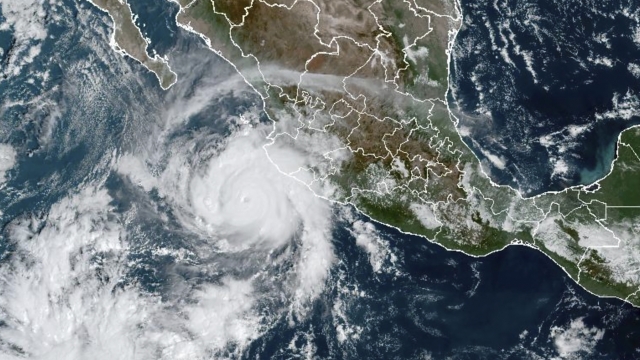 In Tepic, the Nayarit state capital, Roslyn blew down trees and flooded some streets.

Hurricane Roslyn slammed into a sparsely populated stretch of Mexico’s Pacific coast between the resorts of Puerto Vallarta and Mazatlan Sunday morning and quickly moved inland.

By Sunday morning, Roslyn had winds of 90 mph, down from its peak of 130 mph. The U.S. National Hurricane Center said Roslyn was about 95 miles east-southeast of the resort of Mazatlan.

The hurricane was moving north-northeast at 20 miles per hour and was expected to lose force as it moves further inland.

While it missed a direct hit, Roslyn brought heavy rain and high waves to Puerto Vallarta, where ocean surges lashed the beachside promenade.

The hurricane made landfall around the village of Santa Cruz, near the fishing village of San Blas, about 90 miles north of Puerto Vallarta.

In Tepic, the Nayarit state capital, Roslyn blew down trees and flooded some streets; authorities asked residents to avoid going out Sunday, as crews worked to clear a landslide that had blocked a local highway.

Meanwhile, beachside eateries in Puerto Vallarta where tourists had lunched unconcerned Saturday were abandoned Sunday, and at some the waves had carried away railings and small thatched structures that normally keep the sun off diners.

The head of the state civil defense office for the Puerto Vallarta area, Adrián Bobadilla, said authorities were patrolling the area, but had not yet seen any major damage.“The biggest effect was from the waves, on some of the beachside infrastructure,” said Bobadilla. “We did not have any significant damage.”

The state civil defense office posted video of officers escorting a large sea turtle back to the water, after it had been thrown up on the beach by the large waves.

The National Water Commission said rains from Roslyn could cause mudslides and flooding and the U.S. hurricane center warned that heavy rains could cause flash flooding and landslides over the rugged terrain inland.

You might associate the northern lights with Finland, Norway and Sweden, but you can see this stunning celestial show much closer to home.

Hurricane Ian is being blamed for at least 46 deaths in Florida, Newsy found, with experts expecting the death toll to rise.