Hurricane Michael Upgraded To Category 5 At Time Of Landfall 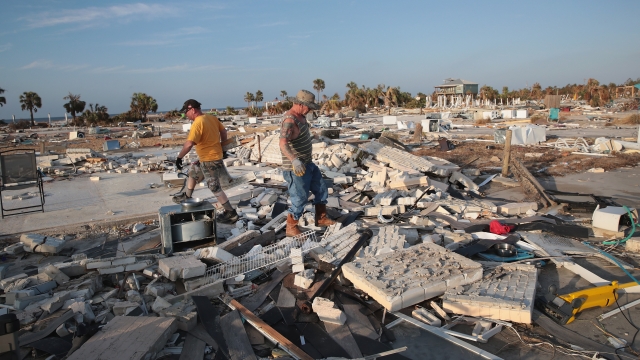 The National Hurricane Center says Hurricane Michael was a Category 5 storm when it hit the Florida Panhandle last October. That new designation is from the NHC's post-storm analysis published Friday.

After making landfall, the storm cut across Georgia before moving over the Carolinas and up into Virginia, causing intense flooding along the way. Originally it was classified a Category 4 hurricane. Even then it was considered the most powerful storm to directly hit the continental U.S. since Hurricane Andrew in 1992.

Hurricane categories range from 1 to 5. The National Hurricane Center defines Category 5 as winds at or above 157 mph. The agency says if a well-built home is hit by a Category 4 hurricane, its roof or some exterior walls may be destroyed. A Category 5 hurricane would completely destroy that home.

According to the new analysis, Michael's winds clocked in at 160 mph when it made landfall. It killed 16 people, and 43 others died from causes indirectly related to the hurricane. Overall the storm caused $25 billion in damage to the U.S.