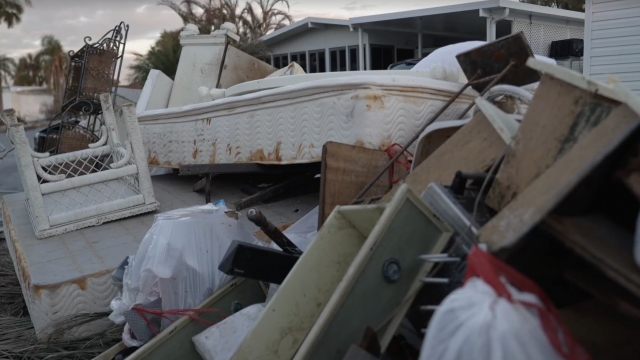 A Fort Myers mobile home neighborhood was completely destroyed by Hurricane Ian, taking retirement plans and funds with it.

A mobile home village that once attracted an aging generation seeking a slice of paradise is now a reminder of the lives Hurricane Ian upended.

A month since the hurricane landed, a pungent smell still lingers in the air.

"They're not even telling us when garbage can come pick up anything," Christine Yurgelaitis said. "Things are starting to really smell."

Belongings that once filled homes with warm memories are now garbage, with high piles lining street after street.

David Yurgelaitis and his wife Christine never thought they'd find themselves back at square one at their age.

The Michigan couple dedicated seven years and tens of thousands of dollars to renovate their Fort Myers mobile home.

"It was completely finished, and it was it was perfect," David Yurgelaitis said.

Their new life was on track before it was wrecked by the powerful category four hurricane, with the damage drawing out their future plans.

Volunteers From Across The U.S. Help Floridians Recover After Ian

Two weeks after Hurricane Ian made landfall in Florida, thousands of volunteers from all over the country are on the ground trying to help.

"This has been devastating to the retirement plans," David Yurgelaitis said. "In fact, I think those are out the window."

Bloomberg reports that people over 65 make up about a third of the population of the hardest-hit counties along the Gulf Coast.

The Yurgelaitis' neighbor Eva Mascoli says her insurance company tells her it's not responsible for the damage to her trailer.

"I'm living off of social security and a small, small pension," Mascoli said.

She and the Yurgelaitis worry painful price increases will slow down their plans to rebuild.

"It's going to take a lot more time in work to buy to fix because the prices of things have doubled," Christine Yurgelaitis said.

But, they're leaning on each other and their other neighbors to bring their dream back to life, working through patience and long days to recreate their slice of paradise after the storm.

"It says 'Welcome to our Beach House,' and that's what it was, it will be again," Christine Yurgelaitis said.