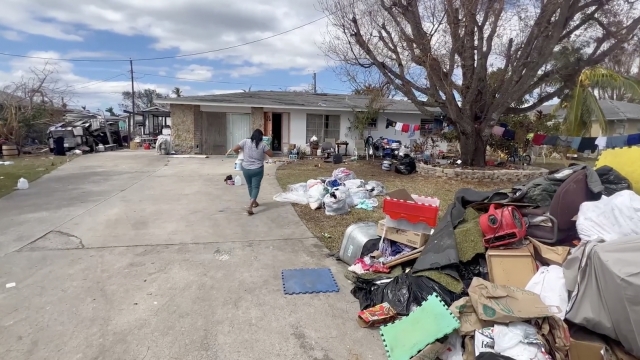 State officials have reported over 100 storm-related deaths in Florida so far, most of these casualties were in Lee County.

Rodrigo Mendoza says he's trying to find the strength to rebuild his life.

Mendoza says his heart is filled with joy as he welcomes donations at his home.

He lost everything, all washed away by Hurricane Ian's storm surge.

"I saw children jumping over the fence, shouting for help, people in the water with water up to their necks," said Mendoza.

Mendoza shot a video right from his roof, as he and his friend saw Hurricane Ian's floodwaters wreak havoc on his entire neighborhood in Lee County.

"I was desperate. It was a horrible experience," said Mendoza.

Mendoza says that in seconds the water was so high and the pressure so strong, that it opened the door and the water rushed inside. They moved a refrigerator and climbed on top to break open the roof and get to safety.

"We lost kitchen stuff, furniture, electronics. What's important is that we're alive. We got up there and some people don't believe me. We're alive to tell our story," said Mendoza.

Almost everyone in this Latin community decided to stay, all of their belongings destroyed.

When asked Mendoza why he didn't evacuate, he said they thought it was going to be "a simple storm."

However, the community's response has been remarkable

A family from Guatemala, who are South Florida residents, drove for two hours to bring donations to Lee County.

People from all parts of Florida are coming together as one family, helping each other.

Throughout the day, many people showed up in their cars going around the community, bringing donations to these families who lost it all. Donations like shoes, clothes, food, and water.

As for Mendoza, he says he's just grateful to be alive.