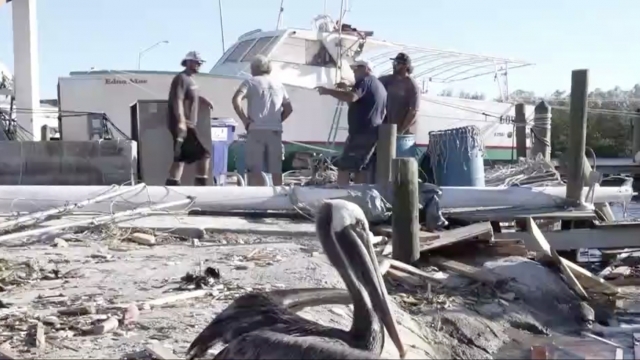 A family fishing business in Fort Myers lost almost everything after Hurricane Ian devastated the area.

Off the Hook Fishing Fleet has been in Michael McPhillips' family for three generations, but Hurricane Ian has left the Fort Myers business in shambles.

Though stone crab fishing runs in his blood, McPhillips says family-owned commercial fishing businesses are hard to come by. It's why he tied down and braced for impact as Hurricane Ian barreled into Fort Myers.

His mom Denise says she begged her son to stay home.

"I said, 'Please... the boats aren't worth it, and we can replace them. We can't replace your life,'" Denise McPhillips said. "But in his heart, he built that boat, and that's his life."

"This is our livelihood," Michael McPhillips said. "This is all we got. Without this, you don't have anything. That's why I was trying to save the boats."

He managed to save one boat, the one named by his great-grandfather, and they got it up and running Sunday.

Florida resident Mike Staczek says he's been through other hurricanes — but this one was by far the worst.

Ian is one of the strongest and costliest hurricanes to ever hit the U.S., but it's not the first Michael McPhillips has experienced.

"I thank God that I had my son come home again, I really did," Denise McPhillips said through tears.

NEWSY'S ADI GUAJARDO: Where do you go from here?

DENISE MCPHILLIPS: I don't know. I'm praying for a miracle.

On Sunday, U.S. officials vowed to release an unprecedented amount of federal disaster aid to areas hit by the tropical storm.

For now, the family is focused on the cleanup and hoping their one boat can run at sea to ensure the family can keep food on the table and the lights on. Though the boat is salvageable, they say it’s going to take a lot of work before they can get it back in the water. Plus, they’ll have to replace thousand of dollars in fishing equipment before they can even make a profit.