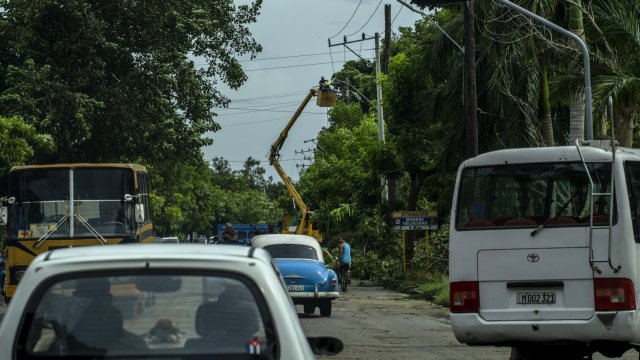 Hurricane Ian has knocked out power to millions in Florida, and some power lines will take long amounts of time to repair.

"It literally sounded like a freight train for about two hours straight," said Luke Quave, Port Charlotte resident. "It would not leave."

Workers from dozens of states are repairing lines and equipment wherever they can, but in some cases, the damage is so bad that it's simply impossible.

"There are sections of our territory close to the beach along barrier islands that will require rebuilding," said Eric Silagy, president and CEO of Florida Power & Light Company. "There's some destructive areas that simply cannot be repaired, and they'll have to be rebuilt."

Across Lee County, home to Ft.. Myers and Cape Coral, homes were washed away, turned on their side or even burned.

The Sanibel causeway, which is the only connection for Sanibel Island to the mainland, washed away.

"Sanibel is destruction," Gov. Ron DeSantis said. "It got hit with really biblical storm surge, and it washed away roads. It washed away structures that were not new and could withstand that."

From polluted water to infectious disease to pregnancy loss, the health impacts people face after a hurricane can linger for months.

The county's electric grid needs to be rebuilt, dramatically prolonging estimates for power restoration. Even that won't get power back to everyone.

"Unfortunately, there are also homes and businesses that will simply not be able to safely take the power once its ready," Silagy said.

Now as some Floridians look at weeks off the grid, experts are trying to remind them of the potential dangers of standalone generators.

Generators inside the house pose carbon monoxide threats, even when the windows are open. But putting them outside is a challenge for people whose backyards are now rivers and lakes.

Experts say anyone relying on a generator needs to be extra careful and make sure CO alarms are nearby.

"We're just hunkering down, waiting to hear when things are gonna start going back down, when the power's gonna start coming back," said Alex White, Orlando resident.