Hurricane Gonzalo Is A Category 4 And Heading To Bermuda 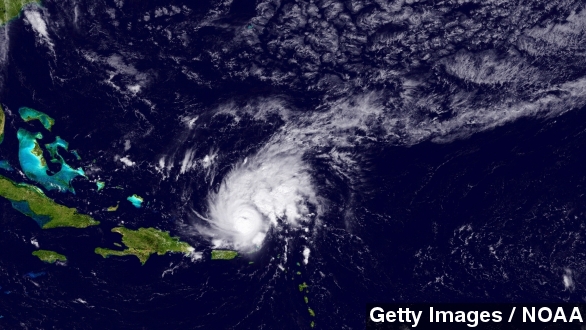 SMS
Hurricane Gonzalo Is A Category 4 And Heading To Bermuda

By Sebastian Martinez
October 16, 2014
Powerful hurricane could hit Bermuda this weekend, and even if it misses it will likely do some damage.
SHOW TRANSCRIPT

The most powerful Atlantic hurricane in years could have Bermuda in its sights as it moves north from the Caribbean.

Hurricane Gonzalo is projected to hit Bermuda, or pass just by it on Friday, with the hurricane strengthening to a Category 4 early Thursday morning.

That means 140 mph winds, and even if it doesn't directly hit Bermuda, the effects could be devastating.

THE WEATHER CHANNEL: "Maybe passing just west of Bermuda, and that would bring the very worst of the weather into Bermuda."

Already on Wednesday, Gonzalo caused inclement weather in Bermuda, with heavy rains and high winds preceding the arrival of the actual hurricane. (Video via The Royal Gazette)

Local paper The Royal Gazette reported the expected hurricane led to a shopping frenzy, with thousands of people stocking up on hurricane supplies, after getting hit by a strong tropical storm this past Sunday.

The Weather Channel reports two back-to-back systems like that are pretty rare outside of certain Pacific hotspots — the last time it happened in Bermuda was in 1981, when two storms passed on either side of the island within five days.

The worst of the hurricane is expected to start hitting Bermuda around midday on Friday, continuing on through the night as it passes over the island of 60,000.