Hurricane Evacuees: At Home Within The Puerto Rican Diaspora 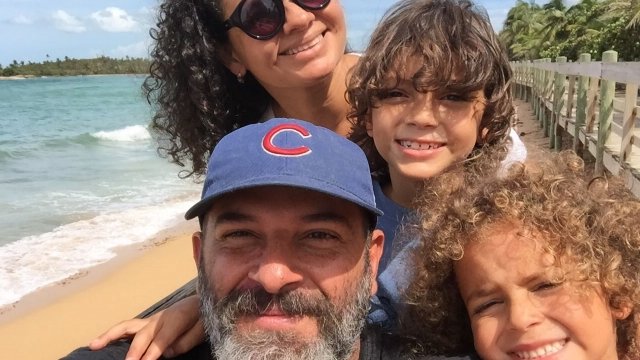 "I've landed in probably the home away from home," said Richard Santiago, who evacuated from Puerto Rico to Chicago a month after Hurricane Maria devastated the island.

Seventeen years ago, Santiago worked as a visiting artist for a local school that had just hired him for a new project before the storm. This time, Santiago decided to resettle in Chicago with his wife and children.

"After going through what we went through, it's very important that we create these memories for my children so that they remember, 'Yeah, we went through this really harsh moment in time, but as a family together, we were able to surpass that and enjoy the little bit of happiness that we were provided by other people,'" Santiago said. "Not everything is bad and not everything is sorrowful.

"It's just a feeling of being at home, that you are in a community, that people are calling you, you know: 'Are you OK? Come on over; don't stay in four walls and looking at the walls. Make them feel welcome.'" 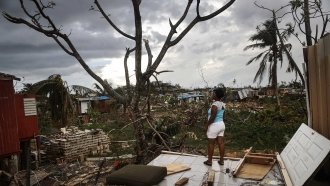 With help from his friends in the local Puerto Rican community, Santiago was able to find an apartment, a car and a school for his two kids. He's one of an estimated 135,000 evacuees who have arrived on the U.S. mainland since Hurricane Maria badly damaged Puerto Rico six months ago. And while the majority of these evacuees have resettled in Florida and other East Coast states, Chicago has received a couple thousand of them. After New York City and Philadelphia, Chicago has the mainland's third-largest Puerto Rican population.

During a visit to the city's Hurricane Resource Center, U.S. Sen. Dick Durbin, D-Ill., lauded efforts from Chicago's elected officials to welcome evacuees. He said: "The people who live in this region have opened their arms to their fellow Americans who are evacuating a disaster, uprooting their families and coming here, looking for that helping hand. I feel good about this."

Jose Lopez, the executive director of Chicago's Puerto Rican Cultural Center agreed. He said: "Having the political capital that we have as a community and being able to engage the imagination of the mayor of Chicago, Rahm Emanuel, I think has been an amazing relationship. It obviously speaks to the power of this community."

"And in this community, having the world's largest flag, made out of steel, anywhere in the world, and for Puerto Ricans to be welcoming a community with those flags obviously adds a new dimension to the sort of relationship of the Puerto Ricans in Puerto Rico with the diaspora," Lopez said.

"Puerto Rico had been blessed for so many years to always escape with the right foot up front from hurricanes that went by," Santiago said. "And you have to realize that 10 days before, we had Hurricane Irma, and the same thing happened. It was going to come right through — almost the same path as Maria — and it went up north, you know. Like at the last minute, it just moved. So it just keeps building, this myth, that we're not gonna be hit.

"It wasn't until the wind just starting picking up, maybe, 10 hours before it hit that really I got scared.

"A tornado, it hits, and everything happens, but imagine like that same power but for six hours. And everything was just white. It's like a snowstorm. You can't see anything. You don't know when it's going to end.

"And all you keep thinking is how is your mother? How is your family? How are your friends, you know? And there's no communication, and I don't know even know how to explain it — it's just despair. There's the calm before the storm. and then there is despair after the storm, you know? I don't know what to say. 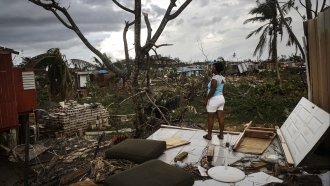 "The main problem was after the hurricane. ... The aftermath is first — what everyone keeps thinking about. There's no electricity, there's no water, but if you don't have cash in your pockets, there's no ATMs, you can't get money from the ATMs. ... Everything is closed, everything is destroyed, trees everywhere. Electrical cables everywhere."

While the U.S. government counted 64 deaths on the island as a result of the storm, other independent institutions estimated the death toll was closer to 1,000. And when President Donald Trump visited the island a couple weeks after the hurricane, he said:

"There are stories of people whose parents or family members died and nobody could get to them so they had to bury them in the backyard," Santiago said. "And nobody went to claim, to see, to investigate, you know. It's like if you're screaming: 'This is really bad, this is really bad. I'm suffering this, I'm suffering that,' and the government is telling you: 'No you're not. You're OK. You just have a cold.'"

It's now been six months since Hurricane Maria wiped out electricity on the entire island and left more than a third of its households without safe drinking water. Today, Puerto Rico faces a growing mental health crisis, and hundreds of thousands of homes remain without electricity as efforts to rebuild the power grid have been slowed by botched contracts and by the Puerto Rican government's financial struggles.

"If there's one thing that's been really sad about this whole process," Santiago said, "it has been the treatment of the U.S. government to Puerto Rico. I mean, if there was any questions that we are third-class citizens, I think through Maria, it was obvious."

The Puerto Rican Agenda is a Chicago nonprofit that seeks the advancement of the Puerto Rican community in the city. As part of the organization's campaign for rescue, relief and rebuilding in Puerto Rico, Santiago is working to save the island's School of Visual Arts and Design. Aside from being a painter, he is also a professor at the university. Santiago estimates the school's physical damage to be around $1 million. But the real damage, he says, lies in the loss of staff and students. 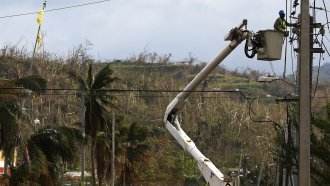 Puerto Rico's Electric Authority Is Getting A $300 Million Loan

"A country without culture is a dead country, and that school is a vein, is an artery for the arts in Puerto Rico. So, we have to try survive this artery you know. I'm dedicated to that. I can do a whole lot more from here, trying to raise funds, get a dialogue from the diaspora with the board of directors there, to connect and maybe do exchange programs with some of the students and professors, also.

"I've been lucky in the sense I've been connected to the right people from the beginning, but you know, that's the reason why I'm here. I wouldn't have gone to Wisconsin — I don't know anybody — or Nebraska. Chicago made sense, but mainly the solidarity and empathy from the people here in this community for others, you know, that's the main thing."