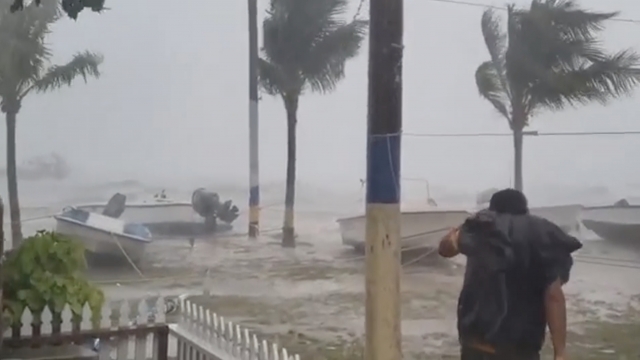 With days of dangerous rain and wind still to come, Hurricane Dorian is already a record-breaker.

The storm made landfall on Great Abaco Island in the Bahamas with sustained winds of 185 mph. That tied the record for the strongest Atlantic hurricane at landfall. The co-record-holder is the Labor Day weekend hurricane in 1935.

That same wind speed — 185 mph — puts Hurricane Dorian second on the list of Atlantic storms with the fastest recorded winds. The only stronger storm was Hurricane Allen in 1980, with sustained winds at 190 mph.

Wind speeds aren't the only measure of a hurricane's strength. They're also measured by pressure — the lower the pressure, the stronger the storm — and by the damage they leave behind.

Before the storm had even passed completely over Grand Bahama Island, Hurricane Dorian was already deemed the most destructive one ever to hit the Bahamas.