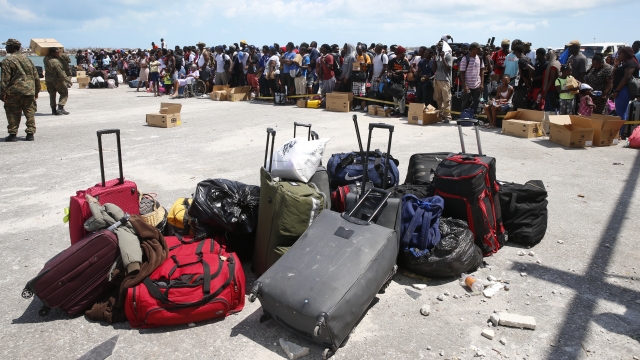 SMS
Hurricane Dorian Survivors Ordered To Disembark Ferry Headed For U.S.
By Briana Koeneman
By Briana Koeneman
September 9, 2019
Evacuees said they were informed that all they needed to board the vessel were their Bahamian passports and proof of a clean criminal record.
SHOW TRANSCRIPT

Dozens of Hurricane Dorian survivors thought they were finally leaving the storm-ravaged Bahamas behind as they boarded a ferry headed for Florida Sunday.

But right before the boat was about to set sail, an announcement over the loudspeaker instructed all passengers who didn't have a U.S. visa to disembark.

Evacuees told reporters they were informed that all they needed to board the vessel were their Bahamian passports and proof of a clean criminal record.

According to Miami TV station WSVN, crew members said, at the last minute, U.S. Customs and Border Protection said they weren't allowed to take any passengers without a U.S. visa.

But CBP is pointing the finger at the ferry company. A spokesperson for the agency's Florida office told Newsweek the company was informed that it would need to take evacuees to Nassau to get their visas before entering the U.S. Instead, they were forced off the ferry and stranded in the Bahamas.

Florida lawmakers have already asked President Donald Trump to waive visa requirements for Bahamians who have relatives in the U.S. they can stay with as the country recovers from Dorian.

We should note that's not the same as Temporary Protected Status, otherwise known as TPS. Under that program, people from certain countries dealing with conflict or disaster can temporarily stay in the U.S. until it's safe to go back.

But TPS probably wouldn't help many Bahamians, since it only applies to individuals who are in the U.S. when the program is announced.

Thousands of people have already fled the Bahamas after Hurricane Dorian hit earlier this month, leaving dozens of people dead and widespread destruction across the islands.