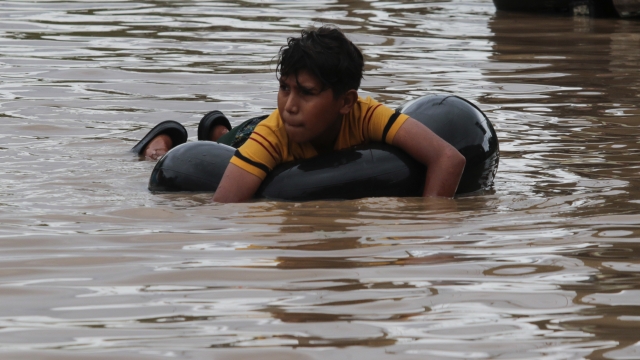 "The government has not come to rebuild anything here. You can see our alley here is still full of mud," said Cinia Aracely Varela Aguilar.

"The storms took everything from us. So we've been living in the street. We had to seek refuge here under the bridge," said Alberto Gomez.

With reconstruction efforts barely underway and little government aid, many see no choice but to head north toward the U.S.

"The only option we have is to immigrate. So that our families, our children eat because we have not received anything from the government," said Eda Morales.

Last November, Morales lost all her belongings after the hurricanes caused the Chamelecón river to flood her house.

She’s thinking of making the long trek north to the United States but is afraid of the dangers ahead.

"I'm afraid that one day I will make the trip and they will kidnap me on the way, leaving my children orphans," Morales said.

Most unaccompanied children and families came from Guatemala and Honduras, the two countries hit hardest by the hurricanes.

"It left us without clothes, without a bed, without anything. Without work," Varela Aguilar said.

Honduras has one of the world’s highest murder rates and its per capita income is less than $2,400 a year. Add corruption and people here have been trying their chance at the American dream for years.

COVID-19, the storms and the ensuing indifference from a president accused of drug trafficking have only made things worse.

"We have not recovered from the storms," Varela Aguilar said.

Before she lost everything to the storms, Varela Aguilar lost her job.

"They fired me because I complained that they were not providing masks and transportation," she said.

After the hurricanes, she also lost her sister.

"Her house was made of wood, it was not made of brick, it got destroyed. She was diabetic, hypertensive and because of all that she got sicker and died," Varela Aguilar said.

Unless she finds a job in Honduras, Varela Aguilar says she will try her luck in the U.S. where she has relatives. But at the moment, she says she's feeling too weak and depressed to make the 1,400-mile journey alone with her two children.

"When the rainy season comes I don't know what we're going to do because we're already worse off than last year," she said.