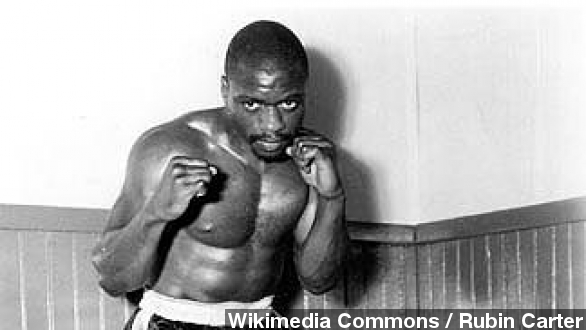 SMS
'Hurricane' Carter, Boxer Wrongly Convicted Of Murder, Dies
By John O'Connor
By John O'Connor
April 20, 2014
Rubin "Hurricane" Carter, the star boxer who became a symbol of racial injustice after being wrongly convicted of murder, has died at the age of 76.
SHOW TRANSCRIPT

Rubin "Hurricane" Carter, the star prizefighter who became a symbol of racial injustice after being wrongly convicted of murder, has died at the age of 76.

His longtime friend and co-defendant in those wrongful murder convictions says the cause of death was prostate cancer. The former boxer was reportedly receiving treatment in Toronto before he passed away. (Via Fox News)

While Carter was known for his ferocious style in the ring — tallying 20 knockouts in his professional career and nearly winning the middleweight title in 1964 — his most memorable fight would ultimately be against the legal system in the state of New Jersey.

Hurricane Carter spent nearly two decades in prison after he was wrongly convicted twice of murdering three people at a tavern in Patterson, New Jersey in 1966. Eventually, both of those jury verdicts were overturned on different grounds of prosecutorial misconduct. (Via CTV)

The New York Times explains that misconduct included: "recanted testimony, suppressed evidence, [and] allegations of prosecutorial racial bias" for "resorting, without evidence, to the racial revenge theory" since "Carter was black and shooting victims were white."

Carter's situation gained international notoriety after he was convicted on the same murder charges again only nine months after his first conviction was overturned.

His story became engrained in pop culture after Bob Dylan released the song "Hurricane," which defended Carter's innocence and vilified the prosecution and police. That song would become a Top 40 hit in 1976. (Via Rolling Stone)

More recently Carter's story was the subject of a movie. The 1999 film "The Hurricane" starred Denzel Washington, who was nominated for an Academy Award for the role.

All charges against Carter were finally dismissed in 1988 even though the prosecution pushed to reinstate the charges again after they were overturned for a second time.

“If I find a heaven after this life, I’ll be quite surprised ... [O]n this planet .. I lived in hell for the first 49 years, and have been in heaven for the past 28 years. To live in a world where truth matters and justice, however late, really happens, that world would be heaven enough for us all.” (Via New York Daily News)