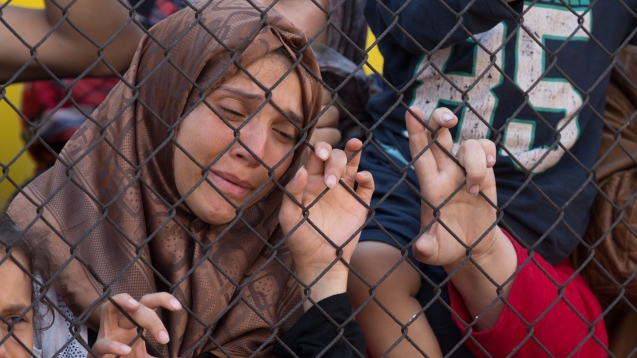 Officials in Germany, Austria and Hungary are now allowing thousands of refugees through their borders. This comes after Hungarian police initially blocked trains carrying the refugees.

"These are families around us right now that have all fled the wars in Syria making this horrific journey with their children. They're not entirely 100% sure where this train is going to end up," CNN reporter Arwa Damon said while on a train with the refugees.

After a standoff with Hungarian police near the country's capital, the refugees began walking toward the Austrian border. After public outcry, Hungarian officials sent buses to carry the refugees the rest of the way.

"Well it looks as though those rumors are right, these are buses that have turned up," BBC's Matthew Price said in a video he tweeted.

Seeing images like these and hearing stories of the pain refugees are going through could make it hard for any country to turn its back. (Video via United Nations High Commissioner for Refugees)

"We have no more money to eat; to drink water at least to drink milk at least. We have no more words to describe our situation," a refugee says in a video from the United Nations.

The United Nations has said nations part of the European Union must accept the refugees and share that burden, but so far the European countries haven't been able to find a comprehensive solution to the crisis.  (Video via United Nations High Commissioner for Refugees)

This video includes images from Getty Images and Chris Zabriskie / CC BY 4.0.