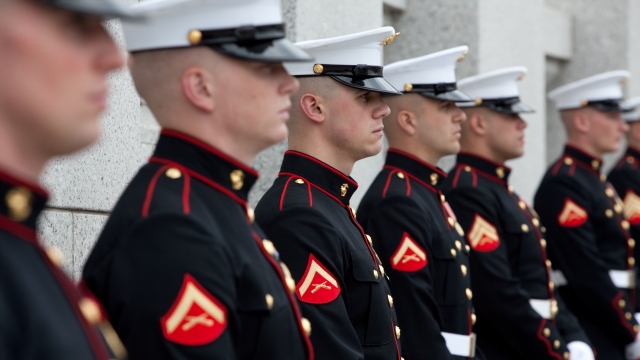 SMS
Hundreds Of Marines Flood Texas Hospital To Visit One Of Their Own
By Katherine Biek
By Katherine Biek
February 18, 2016
Bobby Donald Diaz suffered a stroke several weeks ago and he asked for a few of his fellow Marines to visit him in the hospital.
SHOW TRANSCRIPT

The motto of the U.S. Marine Corps is "Semper Fidelis." It translates to "always faithful" in Latin.

Perhaps this is why more than 100 Marines have shown up at a Texas hospital to visit Bobby Donald Diaz, a 79-year-old Marine who is recovering from a stroke.

"Nothing more important than a brother," a visitor said.

KHOU reports Diaz asked his family to contact a few of his friends from the Corps and have them come to the Memorial Hermann medical center to cheer him up.

So his wife reached out to a few friends, and then somehow word about Diaz's request for company spread around social media.

"It just goes to show you, Marine Corps: Once a brother, always a brother, no matter what. When you feel bad, you can't feel bad because all your brothers are here," Diaz told KHOU.

"He just wanted to see a Marine, one of his brothers. ... I can't believe all the support and the prayers. The Marines have really boosted our morale," Diaz's wife, Marilyn, told Your Houston News.

And it appears more service members than just the Marines heard the news. A member of the Army commented on KHOU's Facebook page, saying she also visited Diaz.

The majority of Marines who've visited Diaz in the hospital had never met him before.