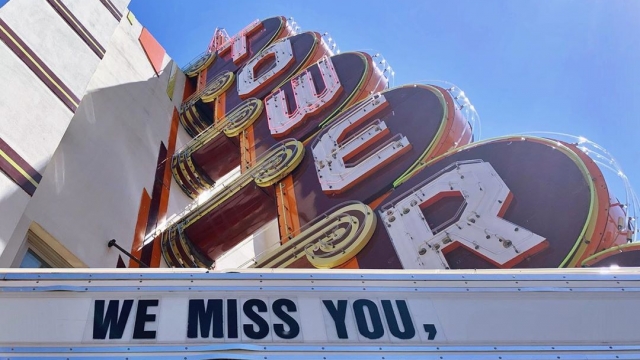 SMS
Hundreds Of Indie Music Venues Are In Danger Of Closing Completely
By Casey Mendoza
By Casey Mendoza
July 29, 2020
The National Independent Venue Association was born out of the pandemic to "save the stages" of hundreds of indie music venues in the U.S.
SHOW TRANSCRIPT

"What are some of your favorite venues across the country?"

"I'm standing in my favorite venue. … Which is at Fitzgerald's Nightclub."

Independent music venues are some of the hardest-hit businesses during the pandemic. As the "first to close and last to open," many in the music industry are worried about whether their stages can survive the lengthy closures, continuing expenses and massive revenue losses.

Mike Robinson: "There's a lot of just like legendary venues that are in danger right now. Places like Nirvana played in, The Ramones played in."

Donnie Biggins: "The biggest question I get is: What are you going to do? And I think I've tried to answer that question for months with some type of creative response, … but the reality is that there's not much we can do besides sit and wait."

Audrey Fix Schaefer: "We did a survey of NIVA members a couple months ago, and found that if the shutdown lasts six months or longer and there's no significant federal help, 90% of NIVA members said that they will go out of business entirely."

NIVA is the National Independent Venue Association, and it's lobbying lawmakers with the "Save Our Stages" movement to establish grant programs and tax credits for struggling venues unable to survive on existing small business support programs.

As a national organization, NIVA is unprecedented itself.

Schaefer: “This association didn't even exist until the pandemic. And now we have 2,000 member venues across the country in all 50 states and Washington, D.C."

The movement is finding support from both sides of the aisle, and that's because the issue affects local economies as much as it does the music industry. Last year, a survey from the Chicago Loop Alliance found that each dollar spent on a ticket generated another $12 for other local businesses.

Outside of the U.S., the U.K. government has already approved almost $3 million to support English music venues and nightclubs — meaning individual businesses can receive between $1,200 and $100,000 in emergency relief until September.

In the U.S., it's still unclear if federal financial support will be approved in time. And as the pandemic continues, that pressure rides on top of the uncertainty of when venues can reopen at all.

Robinson: "I think every musician at this point has sort of had the thought of like: Will I ever play a show again?"

Biggins: "There is no end in sight, currently. So these calls to action are very important for our patrons and our venues and our artists."