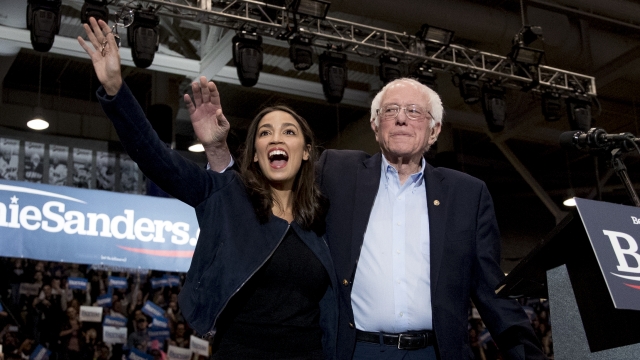 The Democrats are using the opening days of their convention to drive home one big theme: Unity.

"Tonight, my friends, in contrast, we've heard a lot about how we can unite as Americans," Sen. Amy Klobuchar, D-Minn., said Monday night during her speech at the Democratic National Convention.

But behind the heavily choreographed prime-time programming, progressives are ready to push Biden to the left as soon as he takes office.

"Four major things that they'll be pushing and fighting for: Green New Deal, Medicare for All, getting corporate and dirty and dark money out of politics, and police and criminal justice reform," explained Cooper Teboe, a progressive political strategist whose clients include Rep. Ro Khanna, D-Calif.; Sen. Edward Markey, D-Mass.; and Democratic candidate J.D. Scholten, who is running for a congressional seat in Iowa's 4th District.

The theme of night two — "Leadership Matters" — is likely to display a familiar battle between the party's old guard and left wing over health care, as delegates hear from Rep. Alexandria Ocasio-Cortez, D-N.Y., and Stacey Abrams and reveal the final tally for approving the 2020 Democratic platform.

Democrats voted on the platform between Aug. 3-14, according to a DNC staffer, and it's unclear if it passes with flying colors.

850 delegates — most of whom back Bernie Sanders in the primary — have signed a petition calling on delegates to "vote against any platform that does not include a plank supporting Medicare for All."

Progressive Reps. Ro Khanna, D-Calif., and Rashida Tlaib, D-Mich., and newly-elected Cori Bush are some of those who have signed the pledge.

The DNC and Biden campaign are trying to appeal to progressives by noting the platform "welcomes" advocates who "support a Medicare for All approach," though it calls for achieving universal health care through a public option.

"Does it go far enough on Medicare for all? No — but it does move the needle in a big way in protecting unions and in environmental justice, and I think that that is a huge signal to progressives that the ticket at the very least is leaning and willing to change their views on things," said Teboe, the progressive political strategist.

But many progressives say that's not enough. They're also frustrated over the campaign's new efforts to appeal to some parts of the GOP rather than members of its own party.

Tension in the Democrat's "big-tent" approach was on full view on night one as speakers offered a different take on what a Biden presidency would look like.

"I'm sure there are republicans and independents who couldn't imagine crossing over to support a democrat. They fear Joe may turn a sharp, left and leave them behind. I don't believe that," said former Gov. John Kasich, R-Ohio, Monday night while addressing the Convention.

"Our campaign ended several months ago, but our movement continues and is getting stronger every day," Sen. Bernie Sanders, I-Vt., said Monday night during his DNC speech. "Many of the ideas we fought for, that just a few years ago were considered 'radical,' are now mainstream."

Many in the Democratic Party now wondering who really represents the party.

"It's the most progressive policy platform we've had in the modern history of the Democratic party. It's more progressive than both 2008 and 2016 and I think that's a huge signal to progressives from the Biden campaign that, 'Hey, we're listening, we care, let's do this together, let's be a big tent party,'" explained Teboe.