The Contentious Business Of Holding ICE Prisoners In County Jails 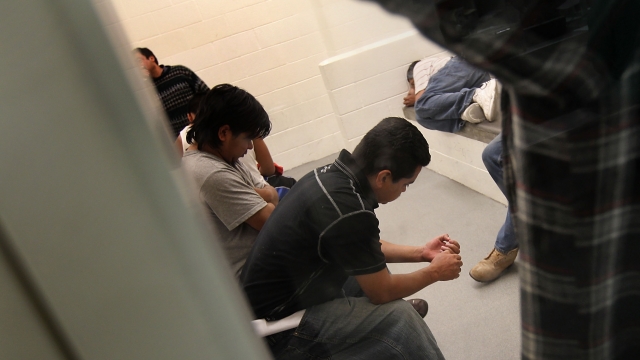 SMS
The Contentious Business Of Holding ICE Prisoners In County Jails
By Ben Schamisso
By Ben Schamisso
February 20, 2019
With controversy surrounding ICE, more and more officials are reassessing — or ending — their detention deals with the federal government.
SHOW TRANSCRIPT

There's been a lot of talks about immigrant detention recently.

But little has been said about who's detaining the nearly 50,000 undocumented immigrants currently in ICE custody. This may come as a surprise, but for the most part, they’re not actually in ICE detention centers.

In 2017, nine out of 10 locked-up immigrants were detained by local governments or private jails. That's because the federal government has hundreds of deals with local authorities to detain immigrants in almost 700 counties.

And here's the interesting part: In light of the controversy around ICE under the Trump administration, detaining immigrants is becoming an increasingly unpopular business.

In McHenry County, Illinois, a contract to detain around 270 immigrants a day brought in $10 million in 2018 — almost a record for the suburban county. But some locals are becoming uncomfortable about partnering with ICE.

"What happens in Washington directly impacts this county because it impacts the jail, it impacts decisions to detain versus to release on electronic monitoring," said Carlos Acosta, who was elected to McHenry County's board in November.

Acosta made immigration a major focus of his election campaign, and he's been questioning the county's relationship with ICE.

"McHenry County residents who may be very progressive with regards to immigration reform, now they're having to be challenged. Guess what, you have an example of a regressive immigration policy right here in the county, and what are you going to do about that?" Acosta said.

To better understand McHenry County's detention contract, we have to go back to 2003. Back then, the local population was growing quickly and the county needed a bigger jail. So officials cut a deal: In exchange for a $7 million grant from the federal government to expand the jail, the county agreed to detain undocumented immigrants for the next decade. The agreement was renewed in 2014.

"They know we do a good job," said McHenry County Administrator Peter Austin. "We are in a location that is very close to Chicago, very close to Rockford, very close to Milwaukee. So they want to keep giving us the business, and right now it continues to make sense for us to provide that space."

The county's board has the authority to end or renegotiate the contract. Acosta recognizes that ending the deal could blow a hole in the county's finances and says that option should be studied carefully. But in the meantime, he wants more transparency and more oversight.

Acosta: "Now, I start getting the sheriff's reports every month because I sit on the county board. There's literally one line of information about detainees, about the ICE contract. I would want to see that expanded, you know: How many detainees came and went? You know, were there any critical incidents with regards to detainees? What are your policies to prevent someone from being inappropriately detained? You know, so at least we have, again, we have some data, you know. I would love to see what's the average length of stay of somebody at the jail."

The county receives $95 a day per detained immigrant. And whatever's left of that $95 after detainees are fed and cared for goes into a county general fund to "reduce pressure on our taxpayer."

But Acosta says specifics on how much profit the county earns and how that money is spent should be public knowledge. Otherwise, Acosta says, it could look like the county is referring local undocumented immigrants to ICE and cutting the jail's operational costs in order to make a profit.

"There's always going to be a perception that there's some level of a profit motive. They changed food service contractors numerous times and their costs have gone down, you know, for feeding the detainees. Costs for the commissary have gone up, costs for the phone have gone up. How restrictive is it becoming in there for someone that gets detained?" Acosta asked.

But local officials told us they don't pick up undocumented immigrants for ICE. Besides, they stressed that the jail is accredited, the staff is highly trained and the immigrants there are behind bars for a legitimate reason.

"These are people that have broken the law or allegedly broken the law, have come in contact with law enforcement and need to be detained until they can go on trial or have their immigration status cleared up," explained Austin. "And and I think those who are concerned about what we're doing here would would understand that that's just a necessary step in the process."

It's important to note that county officials don't actually know about the detainees' criminal backgrounds because ICE doesn't share that information with them. A local lieutenant told us off-camera that he wished people knew about the various programs offered by the jail, such as know-your-rights sessions, ESL classes and pastoral care. ICE would not let us film inside the detention center, so we decided instead to talk to someone who visits every week as part of these programs.

"The county jails are small. They're designed for short-term stays. McHenry, for example, has no outdoor exercise. Can you imagine being detained for a year or two years or four years and never going outside?" said Pam Shearman of the Interfaith Community for Detained Immigrants.

Shearman and a dozen volunteers offer weekly pastoral care to detained immigrants at McHenry County jail and three other detention centers in the region.

"An immigration decision will change their entire future life and the future of their family. That's not a time when anybody should have to be alone," said Shearman.

As an immigrant advocate, it's not surprising that Shearman wishes the immigrants she visits could be released under supervision instead of being detained until their hearings. But her anti-detention views seem to be shared by an increasing number of activists and officials at the local level who hope that canceling detention deals could force ICE to reconsider its detention policies.

"Any litigation, any local advocacy is going to be at the margins," said Mark Fleming of the National Immigrant Justice Center. "But I would argue important margins, because I actually think we're at a point where the change needs to come from the local and state reactions rather than this, like let's wait for the grand comprehensive immigration reform."