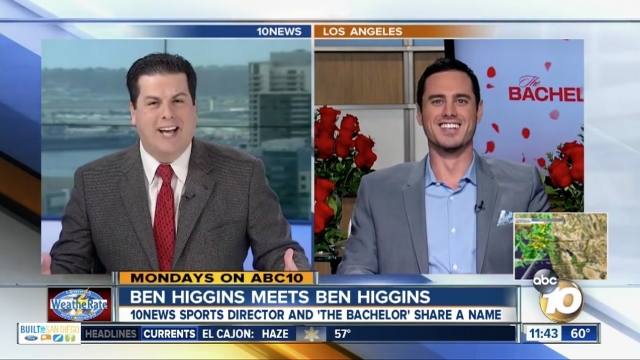 SMS
Hundreds Of Angry 'Bachelor' Fans Take It Out On The Wrong Ben Higgins
By Ryan Biek
By Ryan Biek
March 15, 2016
The newscaster Ben Higgins' response to the misguided tweets makes us think ABC should have picked him in the first place.
SHOW TRANSCRIPT

So you didn't watch "The Bachelor" this season? Well, neither did these angry fans. At least, not closely enough.

Everyone seems to love the bachelor at the beginning of the show.

"Being here with Ben honestly just feels like a dream come true," a contestant said on an episode of the show.

But by Monday night's finale, a lot of fans had changed their tune about this season's main man, Ben Higgins.

That wasn't so great for Ben Higgins the reality TV star — or for the sports director for Newsy's partners at KGTV, who also happens to be named Ben Higgins.

But did he cry about it like the other Ben Higgins? No!

The sports director Higgins' reactions to such reckless hate were arguably more entertaining than the show itself.

Which makes us wonder if ABC picked the wrong Ben Higgins from the beginning. Maybe next year?

This video includes clips from ABC / "The Bachelor" and KGTV.